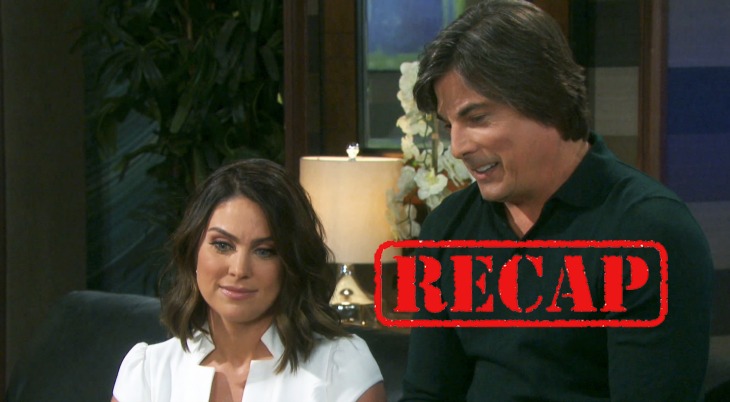 Days of Our Lives’ Lucas (Bryan Dattilo) is home, and Chloe (Nadia Bjorlin) tells him she missed him. Chloe has made plans for them.

Lucas tells Chloe he just came back to get his things, he’s going back to Europe to be with Allie (formerly Carolyn and Campbell Rose). Lucas is afraid of the alcohol around Allie; he says she needs him whether she knows it or not. Chloe asks how long Lucas will be gone.

He says he will be there as long as Allie needs him. Chloe asks if he is moving there, he says Salem will always be his home.

Chloe is upset that Lucas is moving and says she was expecting him to scoop her up in his arms and tell her how much he missed her. Lucas and Chloe share how special they believe each other is and Lucas hugs her and leaves. Brady (Eric Martsolf) goes to talk to Chloe, she tells him about Lucas’ plans. Brady tells Chloe that Lucas is a fool.

Days of Our Lives’ Marlena (Deidre Hall) and Eric (Greg Vaughan) are talking about how to tell Holly (Harlow and Scarlett Mallory) that her mom isn’t coming back. Marlena tells Eric to make sure she knows how many people love her and that her mom is watching over her. Marlena leaves, and Eric holds Nicole’s (ex-Arianne Zucker) medal. Brady shows up at the pub and wants to arrange a memorial service for Nicole. Eric tells Brady he is already planning a memorial and doesn’t need his help.

Brady tells Eric if he wants to blame anyone for Holly being an orphan to look in the mirror. Maggie (Suzanne Rogers) and Sarah (Linsey Godfrey)come in to see Eric choking Brady. Maggie tells Brady to leave, and Maggie is having second thoughts about Eric being around Holly.

Days of Our Lives’ Maggie is looking at dresses for Holly, and she plans on buying her several. Sarah asks Maggie if it’s not time for Holly to move in with Eric. Maggie says Eric isn’t Holly’s father, Daniel (ex-Shawn Christian) is, and Holly belongs with her. Sarah tells Maggie that she will always be Holly’s grandmother but Nicole asked Eric to raise Holly. Sarah believes they should support Eric and honor Nicole’s decision. Sarah tells Maggie that Eric needs to raise Holly to heal after losing Nicole.

Maggie says that Eric is one step away from falling off the wagon. Sarah begs Maggie to talk to Eric for her and Nicole. Eric asks where Holly is and tells Maggie and Sarah he is ready to tell Holly about Nicole. Maggie is there to talk to Eric about Holly. Maggie tells Eric that Sarah told her about his plans. Maggie tells Eric she can’t let him have Holly based on what she saw today.

Maggie says Eric is going through a hard time and suggests he isn’t responsible. Eric lost his temper, but he would never do that with Holly. Maggie says she has seen Eric lose control before and brings up Daniel. Maggie doesn’t think it is the right time for Eric to be taking care of a toddler. Sarah tells Maggie to leave, and she stays with Eric. Maggie tells Eric he can visit any time he wants. Eric tells Sarah that he can’t let Maggie take Holly from him. Sarah tells Eric she will help him prove her mother wrong and they hug.

Days of Our Lives’ Lani (Sal Stowers) arrives at Eli’s (Lamon Archey), Sheila (Tione “T-Boz” Watkins) answers the door and says she just got out of the shower. Lani walks in, and Eli is coming out of the shower, Sheila comments about not taking a shower alone. Lani says she thought they were just friends. Sheila tells Lani she doesn’t want him and lets her believe they had sex.

Eli goes to the police station and tells Lani that Sheila was messing with her. Eli tells Lani they need to talk about what is going on with them right now. Lani tells Eli there is no us. Eli wants to know why Lani can’t be honest about her feelings for him. Lani admits that she cares about Eli. Lani likes it when they are together and misses him when they aren’t.

Lani thought it was just about the baby, Eli tells her it honors their son. Lani knows they share these feelings, but she is afraid it will go wrong again. If Lani isn’t ready, Eli will walk away. Lani apologizes for sending Eli mixed messages. Eli tells Lani he has a roommate willing to keep him busy while he’s waiting for her. Lani grabs him and kisses him.

Marlena "It is so good to see you." #DAYS #Dool pic.twitter.com/0CMT7leUN5

John And Marlena Visit With Abe

Days of Our Lives’ Marlena and John (Drake Hogestyn) are planning on making this a great Christmas. They see Abe (James Reynolds) sitting alone and decide to join him. John tells Abe how he and Marlena work things out when they are out of town. Sheila calls Abe and tells him she is running a little late. Abe says he will see Sheila at the office.

Abe tells John and Marlena that he was talking to Sheila. Marlena is shocked that Abe hired Sheila, he says Lani asked him to because she wants her out of Eli’s apartment. Abe says he is paying for breakfast since John and Marlena only came over to cheer him up. John and Marlena want to pull the family back together. John says Brady needs someone in his life he can count on now.

Days of Our Lives Valerie (ex-Vanessa Williams) calls and cancels their plans for the weekend. Sheila joins Abe at the square and brings Abe a gift. Sheila has organized all of Abe’s papers. Abe is rude to Sheila because she tried to help. Abe tells Sheila he overreacted. Sheila asks what Abe’s problem is and he tells her about Valerie. Sheila leaves and says she will see him at the office.