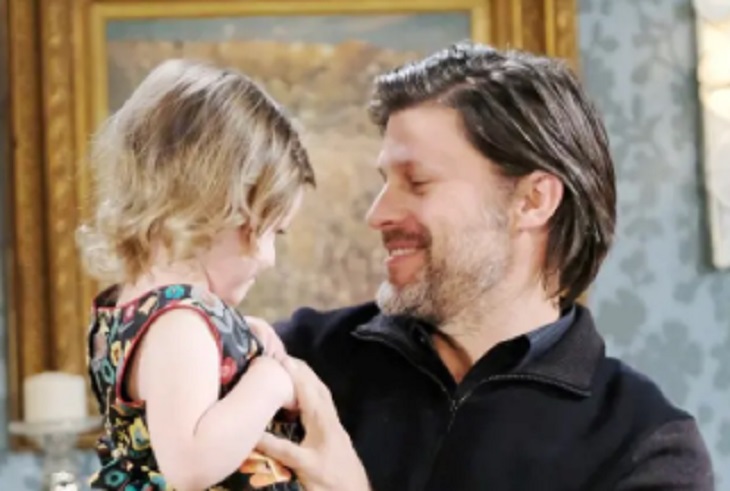 “Days of Our Lives” spoilers for the week of December 10 tease drama with Holly’s custody. As fans recall, before Nicole (Arianne Zucker) died, she asked Eric to take care of her child. However, Justin (Wally Kurth) will deliver a letter that will make things a lot more complicated.

Not only was Eric raising Holly Nicole’s dying wish, but Maggie (Suzanne Rogers) agrees to this as well. Eric is excited about it and will share his joy with Sarah (Linsey Godfrey). However, a letter surfaces that states Nicole wanted Chloe (Nadia Bjorlin) to raise Holly. This changes everything and the custody battle will intensify.

In the latest issue of Soap Opera Digest, Greg Vaughan discussed the storyline.

Days Of Our Lives Spoilers – Nicole’s Wishes For Holly

“The last thing Eric can remember Nicole saying to him is, ‘Take care of my daughter.’ He wants to fulfill and honor her wishes. He’s committed to that.”

“DOOL” spoilers reveal that Maggie initially agrees to allow Eric to raise Holly. However, once she reads the letter, she changes her mind. She confronts Eric and tells him about the letter. Of course, Eric is stunned. After processing the information, Eric can’t deny that the letter was written by Nicole. However, he questions the circumstances that Nicole was under when she wrote that Chloe should raise Holly.

Fans have been busy discussing Nicole’s dying wish. In a “Days of Our Lives” forum, one viewer stated that Eric would have to prove that Nicole verbally told Eric that he needed to raise Holly.

Days Of Our Lives Spoilers – Will Brady Help Eric

However, fans need to remember that there was a witness. That person was none other than Brady Black (Eric Martsolf). However, with Brady and Eric feuding once again, will Brady confirm Eric’s story?

“Days of Our Lives” spoilers for the week of December 10 confirm that there will be drama between Eric and Chloe. They both want the responsibility of raising Nicole’s daughter. Of course, the other Salemites will take sides and it will become an intense storyline. However, only time will tell what a judge will decide.

Keep watching the NBC soap and check back with Soap Opera Spy for the latest “Days of Our Lives” spoilers, rumors, updates and news.