Days of Our Lives Recap November 8: John And Marlena Get Married – Abby Turns The Tables On Kate 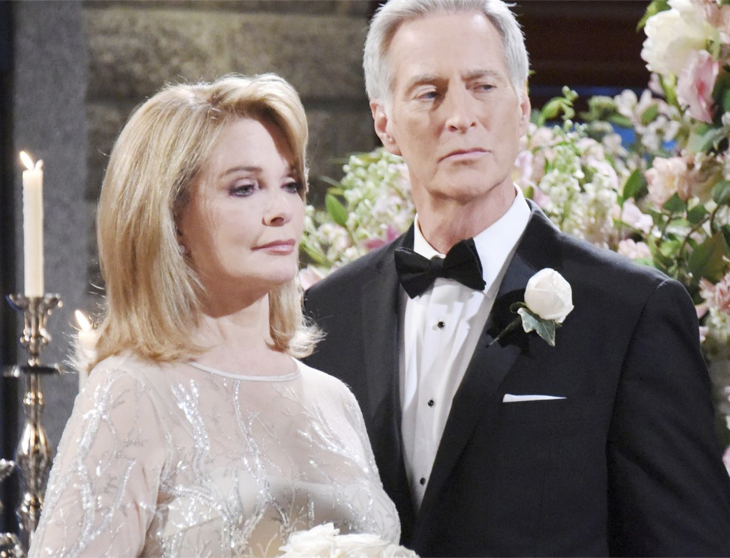 Days of Our Lives (DOOL) recap for Thursday, November 8 reveals, Ben (Robert Scott Wilson) questions why Chad (Billy Flynn) would turn to him after everything he did to him and Abby (Marci Miller).

Ben And Chad Set Their Plan In Motion

Gabi (Camila Banus) comes in and sees Ben with Chad. Gabi wants to know what Chad is up to with Ben. Chad tells Gabi he’s going to have Ben kidnap Abby. Gabi is going crazy trying to figure out how to stop Chad as he and Ben leave. Chad and Ben arrive at the mansion and Ben chokes out the security guard. Ben offers to go in and get Abby; Chad says he will so Abby isn’t scared. Chad is trying to open the door when Stefan arrives and asks what he is doing there. Chad says he was there to see Abby. Ben chokes out Stefan and Chad tells Ben he can leave when he gets rid of him.

Days of Our Lives’ Kate (Lauren Koslow) wants to talk to Abby about Chad. Abby acts like she doesn’t want to let Kate in but agrees so she can find out what’s she’s been up to with Gabi. Abby tells Kate she could start by admitting that she lied about Abby pushing her. Kate asks Abby for a cup of tea. Abby goes to have Harold being tea while Kate pulls out pills. The security guard comes in and says he didn’t let Kate in the house.

What’s in store for Chad and Abigail? #DAYS pic.twitter.com/m2wi3bnS08

Abby makes a deal not to tell Stefan that Kate got past him if he keeps quiet about her letting Kate stay. Kate drugs Abby’s tea while she is out of the room. Abby comes back and asks where were we? Kate hasn’t listened to Gabi’s messages but tells her everything is under control. Abby tells Kate that she and Chad are right, marrying Stefan (Tyler Christopher) was a big mistake, but she doesn’t know how to get out of it.

Abby had switched their teacups, so Kate is drinking the drugged one. Kate encourages Abby to drink her tea, and they will come up with something. Kate tells Abby she can handle Stefan. Kate falls asleep as Abby goes to answer the door. Chad gets into the house and approaches Abby. Chad tells Abby he’s going to take her and get the help she needs. Gabi frantically calls Kate’s phone but gets no answer.

Abe Plans A Surprise For John And Marlena

Days Of Our Lives’ Abe (James Reynolds) asks Belle (Martha Madison) how he ended up marrying John and Hattie (Deidre Hall). Belle explains the plan to Abe. Belle tells Abe that Roman helped John and they didn’t to risk word getting out to Kristen. Abe tells Belle to find Sami (Alison Sweeney), and they will make today the day John (Drake Hogestyn), and Marlena (Deidre Hall) get married. Everything is set up in the square for the wedding. John and Marlena join Sami, and she tells them she is leaving tonight.

In the latest #DAYS, a frantic Sami rushes to find the missing patient.https://t.co/ZsCmioRrzb pic.twitter.com/xP6o5dsQvG

Sami asks John and Marlena if they can have a farewell dinner in the square. Marlena goes to change so they can get out of the hospital. John and Marlena are surprised by their impromptu wedding. Marlena says she’s ready and wants to marry him standing on her own two feet. John tells Abe to give them the short ceremony, they have already said all the important stuff. John tells Marlena he has a better appreciation of what these vows mean. John says his vows, Marlena says she wanted to get married here because of the plague for Tom and Alice. Marlena wasn’t her and John’s marriage to be like theirs.

Marlena says her vows and puts the ring on John’s finger. Abe pronounces John and Marlena man and wife, and they kiss everyone cheers. John and Marlena are happy they did this for them but wants to hold off on the celebration. Susan(Stacy Haiduk) gives Marlena the doll. Sami asks Will (Chandler Massey) to send her pictures of the new place. Sami tells Paul (Christopher Sean) to take good care of Will and apologizes to Belle. Sami tells John she loves him and thanks him for saving her mom again. Sami tells Marlena she is going gladly she could be there for the wedding, they hug, and Sami prepares to leave. John and Marlena agree this is the best wedding ever and vow to have the best anniversaries from here on out.

Love is in the air at #Jarlena‘s wedding reception! Head to our Facebook and celebrate with the cast for the #DAYS anniversary. https://t.co/CU0cbSy9IM pic.twitter.com/sPZ4Gh1Eei

Days Of Our Lives’ Marlena and John join Paul and Will. John thanks Will for being there for Paul. Will and Paul invite John and Marlena to see the new apartment. Will tells John and Marlena about the conversation with Susan (Stacy Haiduk). Will and John go to the morgue to find Sami and E.J. (formerly James Scott) John, Susan, and Will come out of the elevator and tell Marlena that Sami invited her to come to Italy with her.

Marlena wants to go out for some air. Belle needs everyone’s help with a surprise. Belle needs Sami’s help as well, Sami is dealing with Stefan in E.J.’s room. Sami tells Stefan she is using the rest of the money for E.J.’s recovery. Stefan offers to help if she needs it. Sami tells E.J. they will get by just the two of them. Belle asks Sami to help her with a surprise.

At the end of the show, we have a message from Francis Reed (Alice Horton) with scenes going back to the first show. Francis thanks everyone for watching “now and for all the Days of Our Lives” with a Happy 53rd Anniversary message.