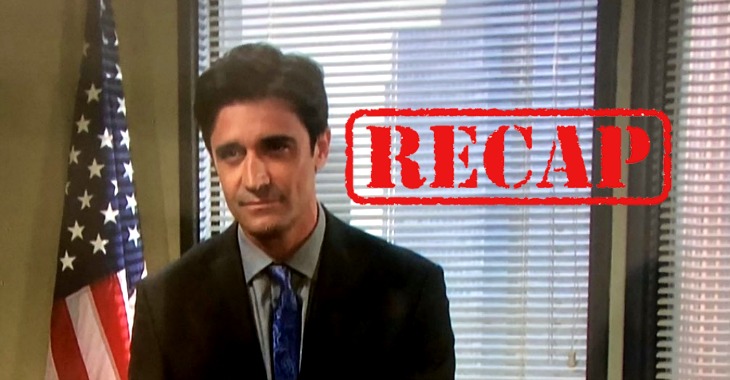 Days Of Our Lives (DOOL) recap for Monday, August 6, 2018 reveals, Will (Chandler Massey) wants to go to the police over the letters, Sonny (Freddie Smith) doesn’t. Ted (Gilles Marini) comes up after listening to their conversation.

Ted Reveals He Had Leo Followed The Night He Died

Sonny asks Ted what the hell he wants. Ted asks Will and Sonny if they really thought this was over. Ted knows Sonny and Will murdered Leo (Greg Rikaart). Ted wants to talk to Sonny and will in a more private place. Ted had an investigator follow Leo the night he died. Ted found the car and Leo’s body in the trunk. Ted refuses to let Will and Sonny get away with killing Leo. Sonny wants to know how much money Ted wants. Ted tells Sonny and Will that they will pay no matter what.

In the latest #DAYS, Sonny and Will learn who’s behind the threatening notes about Leo’s death. https://t.co/ZsCmioRrzb pic.twitter.com/bWvwRKAEgP

Will tells Ted what happened with Leo. Ted says Will and Sonny conspired to hide a brutal crime and got caught, it’s over. Ted says the truth doesn’t matter, what people believe does. Sonny offers to work this out with Ted if Will is left out of it. Ted won’t agree to Sonny’s terms. Will wonders what the notes were about. Ted says it was entertaining to watch them squirm. Ted is looking forward to working together, he will be in touch.

Days of Our Lives’ Adrienne (Judy Evans) and Steve (Stephen Nichols) are talking in the park. Adrienne wants to know where Bonnie (Judy Evans) is, Lucas (Bryan Dattilo) does too. Steve, Adrienne, and Lucas discuss how dangerous Bonnie is. Bonnie got away clean with enough money to stay hidden for a long time. Bonnie has rich Texan’s looking for her and she will start living large and resurface. Lucas doesn’t understand how he ended up with a dead woman in his bed. Adrienne apologizes to Lucas. Lucas says he’s with Chloe (Nadia Bjorlin) and Adrienne belongs with Lucas.

Steve Wonders What Kayla Is Hiding

Days of Our Lives’ Jennifer (Melissa Reeves) and Kayla (Mary Beth Evans) talking about keeping secrets. Jennifer tells Kayla what Brady did to Nicole (Arianna Zucker). Kayla doesn’t understand how Brady (Eric Martsolf) could force Nicole to do anything. Jennifer tells Kayla that Brady has something on Nicole. Nicole probably still loves Eric. Kayla wonders why Eve (Kassie DePaiva) would tell Jennifer this. Kayla questions why Brady would do this.

Kayla wonders if Jennifer is afraid of losing Eric (Greg Vaughan). Jennifer is trying to protect what she has with Eric. Jennifer wants to believe that Eric would still have fallen in love with her. Jennifer feels guilty about saying yes. Jennifer asks if Kayla thinks she is a bad person for keeping this from Eric. Kayla says if so, she’s bad too because she’s kept secrets too. Kayla relives lying to Steve.

In the latest #DAYS, Brady is tempted to tell Eric the truth about Nicole leaving town.https://t.co/ZsCmioRrzb pic.twitter.com/G6nxIjb41o

Kayla tells Jennifer she’s keeping a huge secret from Steve right now. Kayla tells Jennifer she did some things to help Steve that he wouldn’t approve of. Kayla is afraid of what would happen if Steve found out what she did. Steve comes in at the end of the conversation. Kayla walks Jennifer out. Steve wants to know if everything is ok with Jennifer. Kayla asks if Steve has any thoughts on the bachelor party. Steve wants to know what Kayla is hiding.

Days of Our Lives’ Victor (John Aniston) asks if that’s all Jennifer told him, Brady questions why. Brady wants the details. Brady demands to know who Victor is working with. Brady wants to know why Victor got involved. Victor tells Brady it’s for him. Victor tells Brady he sounds like he hates him. Brady questions why he shouldn’t. Victor says everything he did was out of love for Brady.

Victor won’t apologize for trying to keep Tate (Colin and Kyle Schroeder) with him. Brady tells Victor that he should have stayed out of it. Eve defends Victor. Eve tells Brady that Victor’s heart was in the right place. Nobody wanted Theresa (Jen Lilley) to get full custody. Brady only knows that because of Victor Tate is gone. Brady tells Eve there is no way to make this right. Eve tells Brady this is all her fault. Brady refuses to let Eve take the blame. Brady tells Victor he is dead to him.

Eve tells Brady she will talk to Shane and get him to talk to Theresa. Eve goes back in to see Victor. Eve wants to know why Victor covered for her. If Eve doesn’t get Brady to forgive him, Victor will expose her involvement. Eve is more worried about Jennifer Horton. Eve knows Brady still loves Victor. Eve talked to Victor again. Brady doesn’t want to talk about Victor. Brady tells Eve about Eric and Jennifer’s engagement. Eve is happy for Eric and Jennifer.

Days Of Our Lives’ Eric goes to Doug’s Place looking for Julie. Chloe and Eric talk about Nicole and his engagement. Chloe questions if Eric is totally over Nicole. Eric has a special place in his heart for Nicole. Eric would be happy to see Nicole but he’s still committed to Jennifer. Eric is at peace with Jennifer, he isn’t concerned he will get burned. Eric questions hows things are with Chloe and Lucas. Chloe isn’t sure where it’s going. Chloe tells Eric she doesn’t think Lucas is over her being kidnapped.

Chloe says all she could think about was getting back to Lucas. Chloe knows Lucas has always been the one for her, she doesn’t know if he feels the same. Chloe tells Lucas about Eric and Jennifer’s engagement. Lucas is happy for Eric and Jennifer. Lucas tells Chloe he’s been keeping his distance because he’s afraid of letting her down. Chloe tells Lucas he made her very happy. Eric joins Jennifer in the square and tells her about seeing Lucas and Chloe.

General Hospital RECAP Monday, August 6: Michael Finds The Blanket That Might Save Carly