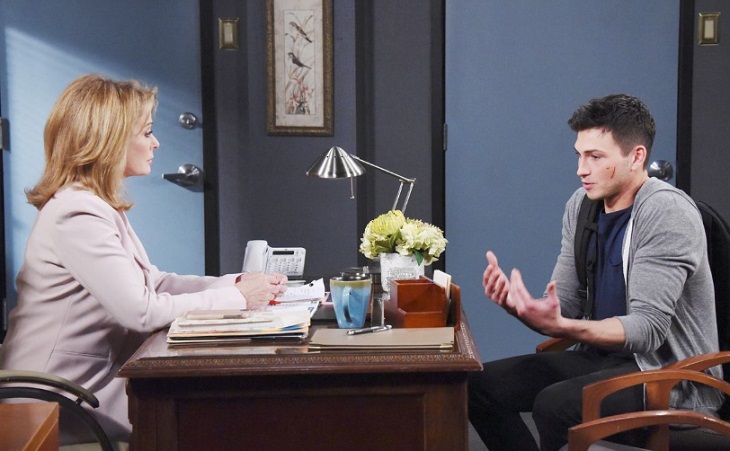 “Days of Our Lives” spoilers Tuesday, August 7, tease that Ben (Robert Scott Wilson) need Marlena’s (Deidre Hall) help. He’s desperate to prove his innocence, but that’s going to be a tricky task. Ciara’s (Victoria Konefal) the only one in Ben’s corner right now, but he’ll still hope Marlena can fix his mess. Ben will encourage Marlena to hypnotize him and help him remember the entire night of the fire.

Marlena will eventually agree to put Ben under and bring his memories to the surface. The technique will work like a charm, but Ben will still face some struggles. How can he convince the cops that his story is the truth? “Days of Our Lives” spoilers say Ben will tell Ciara what he recalls later, but Tripp will remain skeptical. He’ll feel certain that Ben’s the same monster he was before.

DOOL fans can expect Tripp to make a passionate speech. He’ll believe Ciara’s safety depends on this, so he’ll work to get her on his side. Of course, Tripp is also looking out for himself here. He wants a future with Ciara, but it’s clear that Ben’s getting in the way.

“Days” spoilers say Tripp will break down some barriers, but it won’t be long until Ben’s creeping in Ciara’s thoughts again. She truly believes he’s changed for the better, so her feelings for him are growing every day. Ben and Ciara seem to be inching toward a romance, which is bound to bring more complications.

Other “Days” spoilers say we’ll see a significant moment for Abigail (Marci Miller) and Chad (Billy Flynn). Abby’s baby will kick for the first time, so she’ll let Chad feel the movement. Part of him will be happy about the life Abigail’s bringing into the world, but he’ll still be glum about the paternity. Since Chad believes this is Stefan’s (Tyler Christopher) son or daughter, it’ll naturally taint the experience.

Over with Stefan, he’ll mull over impending fatherhood. “Days of Our Lives” spoilers say Chloe (Nadia Bjorlin) will listen to Stefan’s troubles on Tuesday. He’ll talk about how connected he already feels to this baby and express his goal of being involved.

Stefan will go to Abigail and make some demands later this week, so stay tuned for all the “Chabby” drama. We’ll give you updates as other “Days” news and rumors emerge. Stick with DOOL and don’t forget to check Soap Opera Spy often for the latest “Days of Our Lives” spoilers, rumors, updates and news.

The Bold and the Beautiful Spoilers Tuesday, August 7: Hope Has Second Thoughts – Steffy’s Moving On, Not Looking Back