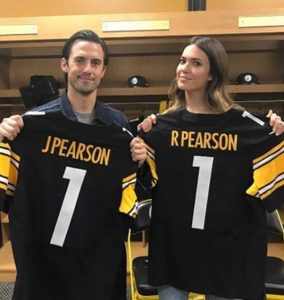 This is Us Season 2 spoilers indicate that fans will finally have the answers they’ve been looking for about Jack Pearson’s (Milo Ventimiglia) mysterious death. In fact, Mandy Moore, who plays Jack’s wife Rebecca Pearson on the show says that the show’s producers plan on setting the record straight about Jack’s death sooner rather than later.

The actress told Entertainment Tonight in an interview, “Wait until September 26th. There will be a giant hint as to what happens with Jack.”

What’s more, Mandy says the Season 2 premiere will reveal “a big, giant piece of the puzzle,” while “during the course of the second season, [fans] will get all the answers that they need.”

So far all we know is that Jack will die during Season 2. That also means for Milo Ventimiglia there’s a good possibility that Jack might only appear in a dream sequence or flashback form for the remainder of the season or series for that matter. Right now, viewers only know that Jack died sometime during Kate, Kevin and Randall Pearson’s teen years.

Related: This is Us Cast Members Score Big Bonuses Before Season 2

While there have been plenty of Jack Pearson death theories floating around the Internet, many of the show’s stars, including Chrissy Metz and Justin Hartley insist that they are all wrong. Of course, fans will just have to tune in to the show to see what will happen next!

This is Us Season 2 returns to the NBC network on September 26 at 9 p.m. How do you think Jack Pearson will die? Let us know what you think by dropping us a line with your thoughts in our comments section below. Also, check back with Soap Opera Spy for all the latest news, updates and spoilers on This is Us Season 2 right here!

Get Exclusive This is us News & Updates!

The Young and the Restless Spoilers: Nick Must Defeat Victor – Faith Becomes a Pawn Again