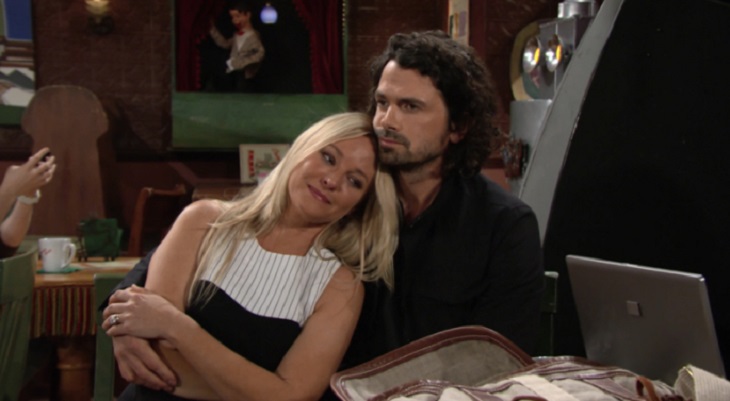 Scott (Daniel Hall) and Sharon (Sharon Case) make a good couple on ‘The Young and the Restless’. They bonded quickly and appear to have established a balanced relationship. Since they live in Genoa City, a storm must therefore be forecast.

It often feels as though concocted conflict is injected into the soap world. Viewers are led to believe that they aren’t interested in upbeat stories, or sustained connections. What’s broadcast reflects the beliefs of those who are in charge and resulting ratings can’t always be directly correlated to audience support, or rejection.

Generally, a couple like ‘Shott’ wouldn’t be nearing a relationship cliff in the real world. All observers know Y&R offers a skewed view of reality that’s meant to be engaging.

Sharon has finally been written back to normalcy on The Young and the Restless. She’s an actual human being who’s worked hard to achieve balance in her 40’s. This needed readjustment took place under former co-executive producer and head writer Sally Sussman’s wise guidance.

There should be no problems brewing since Sharon is okay and Scott is mellow. Well, the coming dilemma this duo will face doesn’t involve existing relationship issues, but rather consequences based upon what’s going to happen.

When a new character is given a last name, like Zack Stinnett (Ryan Ashton), was, it’s reasonable to believe that fictional personality will last for awhile. Ashton’s character has endured through this fall.

Abby (Melissa Ordway) believes that emerging issues with her initial business associate and now, boyfriend are personal. They’re not. Instead, Zack’s behavior is directly linked to the masked operation he runs.

LOVE Y&R? SIGN UP FOR OUR EXCLUSIVE NEWSLETTERS RIGHT HERE!

The trafficking ring is being investigated by Scott, who heads Hashtag. At some point Hall’s character, Paul (Doug Davidson) or both will get a break and expose Zack to the world. The poor souls he and and his henchmen are holding in captivity will be freed and the social message Y&R wanted to send will reach its end.


At that point Abby will be vulnerable and in need of someone else. Scott stands directly in line to be her hero.

Sharon no longer needs saving, as she’s said herself on many occasions. However, she does need trust.

All forecasted developments are likely to take place before Ordway takes her anticipated maternity leave in January. She’ll have recorded shows that will air through approximately Valentine’s Day, by which time ‘Shott’ may have been supplanted by ‘Scabby’.

Soap Opera Spy is a leading source for everything linked to ‘The Young and the Restless’.  Check back for more Y&R spoilers right here.

EastEnders Spoilers: Shane Richie Reveals Big Secret From The Past