The Young and the Restless (YR) Spoilers: Juliet Dies – Cane and Lily May Survive 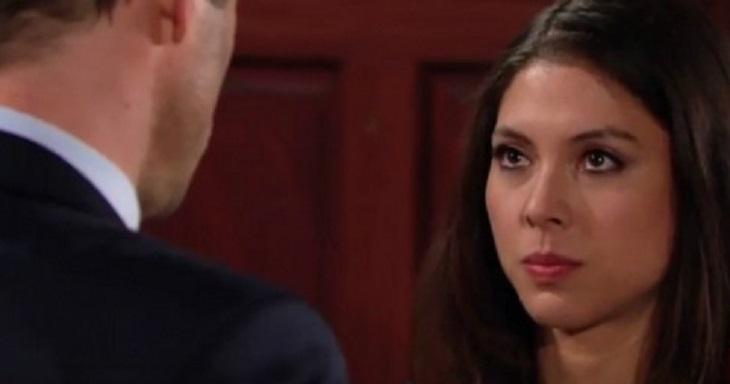 Juliet (Laur Allen) died during childbirth on ‘The Young and the Restless’. That shocking development now means Cane (Daniel Goddard) and Lily (Christel Khalil) may survive. May, instead of the word will was purposely used for a reason.

All factors seem to indicate that ‘Lane’ is primed to reconcile, rather than divorce. That’s what’s implied by executive producer and head writer Mal Young’s team opting to kill off Allen’s generally disliked character.

Viewers would think that Cane will move from the Chancellor mansion back to the Ashby house. Lily will help him raise his son, rather than allow the man she said she still loves become a single parent.

Recent scripts have portrayed Lily as conflicted. She’s was uncertain about ending her link to Cane prior to Juliet’s death. Lily was swayed by Charlie’s (Noah Alexander Gerry) pre-hearing plea in the courtroom and by the heartfelt emotions that Cane expressed. Michael (Christian LeBlanc) was instructed to postpone legal proceedings until Juliet walked in.

‘Lane’s’ reality shifted within minutes of Allen being seen on-screen. After speaking with Lily, Juliet left the courtroom and sat in the hallway. Charlie joined her. Juliet seemed to be experiencing severe cramping until she passed out. Charlie ran to inform everyone what happened and the scene switched to Genoa City Memorial Hospital.

Juliet was initially shown asleep in a room. Some time had passed as Lily woke Cane up. Hilary (Mishael Morgan) and Neil (Kristoff St. John) made separate appearances in the waiting room, where they spoke with ‘Lane’. Cane contacted Juliet’s dad, who wasn’t compassionate about his daughter’s apparent placenta previa crisis.

Y&R’s choice to write-out this character pleases those fans who never liked Juliet and saw her as having destroyed Cane and Lily’s marriage. As hardcore viewers know, Lily offered Cane plenty of leeway. She wasn’t going to divorce him because of what happened with Juliet, or because of the baby.

Related: The Young and the Restless (YR) Poll: Will Lily and Cane Reunite Now? Vote!

Cane’s independent actions against Billy (Jason Thompson) led to Jesse’s (Max Adler) blackmail. That was the issue that proved too much for Lily to bear. So fans will soon learn if this favored couple’s love is enough to overcome all that’s happened.