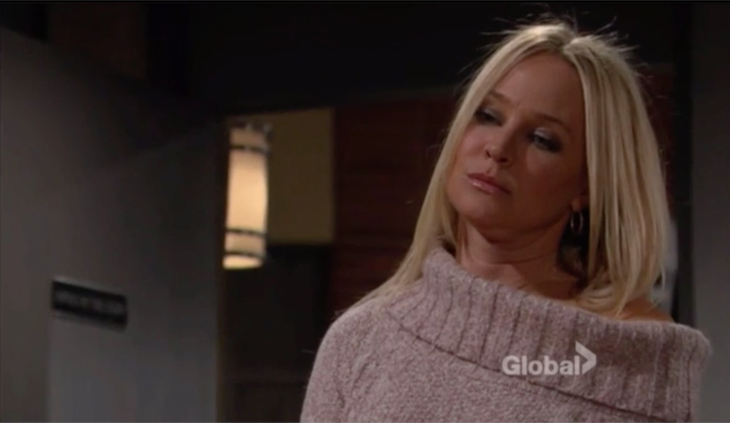 “The Young and the Restless” spoilers for Tuesday, January 17, tease that one of Fisk’s minions will pull a gun on Dylan (Steve Burton). In a car, the goon tells Dylan where to go. They end up meeting Alex (Jess Webb), who lies that she’s Fisk. Dylan eventually gets Alex to confess that there was simply a last-minute change of plans.

After the thug prevents him from exiting, Dylan gives Alex his phone and wallet. She gripes about no one in her circle knowing who he is. Meanwhile, Sharon (Sharon Case) wants Kevin (Greg Rikaart) to help her find out if Dylan is OK. Kevin claims he doesn’t have any more info than Sharon does. When he leaves the room, Sharon finds a burner phone and calls the unknown contact.

Alex answers and hears Sharon’s voice on the other end. Sharon says it’s a wrong number and hangs up. Dylan states that his boss is the only one with that number, but Alex thinks he’s lying. She mentions the woman she just talked to. Dylan contends that it must’ve been his boss’ right-hand woman, Amanda.

Alex makes Dylan prove that he doesn’t care about Amanda. They kiss and head toward the bed. Dylan can’t help but think of Sharon during their lovemaking. Later, Alex makes a phone call while Dylan touches his ring finger. Alex hangs up and gives Dylan updates on the rescheduled meeting with Fisk. It’s happening tomorrow.

Sharon tosses her keys under a paper just before Kevin returns. She pretends she can’t find them. Kevin makes the discovery and says he’ll tell Dylan she loves him if he gets in touch. Later, Noah (Robert Adamson) wants Sharon to open up about what’s bothering her. She gives Noah the undercover assignment news and admits she broke the rules by reaching out to Dylan.

Other “Young and the Restless” spoilers say Victoria (Amelia Heinle) will continue to be overwhelmed by Reed (Tristan Lake Leabu). At home, Reed has his electric guitar on full blast. Nikki (Melody Thomas Scott) calls to invite them to a Newman family gathering. Reed doesn’t want to go, but Victoria insists.

Related: POLL: Do You Want A Nick and Sharon Reunion? VOTE!

Summer (Hunter King) and Abby (Melissa Ordway) can’t make it, but the others arrive at Top of the Tower. Chelsea (Melissa Claire Egan) and Nick (Joshua Morrow) seem a little uncomfortable around each other. Across the room, Victor (Eric Braeden) continues to pester Noah about returning to Newman Enterprises.

Victoria talks to Nick about being there for Reed if he has guy problems. Nearby, Nikki urges Reed to join his school’s orchestra. Reed declines, but likes the idea of practicing his guitar at the ranch so he won’t disturb his mom and siblings. Nikki wanders off and Reed grabs some booze to spike his drink.

Noah meets up with Reed and suggests he should come to open mic night at The Underground. Victor calls everyone to the table and talks about the importance of family. He proposes a toast and they all enjoy themselves. Later, Nick wants Chelsea to hang out with him for a while. They enjoy more wine and are relieved that things are becoming less awkward.

Victoria returns home with Reed and advises him to turn to Nick the next time he has a guy issue. The topic of open mic night comes up, but Victoria won’t allow it. After she heads upstairs, Reed feels sick and rushes outside to hurl.

Y&R rumors hint that Reed’s behavior is going to get worse before it gets better. We’ll keep you posted as other details emerge. Stick with the CBS soap to see what else is in store.

WATCH: ‘The Young and The Restless’ Preview Video Tuesday, January 17