The Young and the Restless Spoilers: Reed Regains Mojo – Vickie Distracted By Smartphone 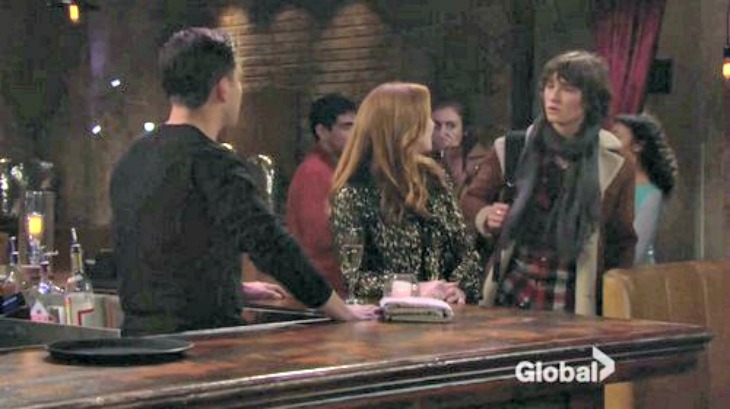 Reed (Tristan Lake Leabu) was aided in regaining his mojo by Mariah (Camryn Grimes) and Zoe (Annalisa Cochrane) on ‘The Young and the Restless’. Vickie (Amelia Heinle) didn’t have to answer her smartphone, but she did. And Billy’s (Jason Thompson) increasing consistency can’t be dismissed by fans, or detractors of this one-time duo.

Impulse buyers, that’s what Brash and Sassy likes. But Victoria shouldn’t have been an impulse phone answerer. Many viewers can surely relate to the wired drive that distracts them from reality. There’s really no need to answer any phone call, unless one believes it’s some type of certain emergency. Yet that’s how twenty-first century electronic consumers have allowed their minds to be conditioned. All cell users in Genoa City should think of life as a line and not allow some fellow smartphone user to jump ahead of anyone with their calls, texts, tweets and the rest.

Reed understandably misread the reaction of Zoe and her friends at The Underground earlier this week. Just as he started to pick his strings and sing, a chorus of cackles could be heard and seen stage left. The impact of peer pressure compelled Reed to escape to his uncle Nick’s (Joshua Morrow) office.

Mariah smartly went to see how the poor soul was doing. Her pep talk did the trick, as she convinced Reed to return to his Open Mic night audience. Even though he then saw Zoe and his mom speaking, a quick chat resolved their misunderstanding. No harm was intended and no meme was posted about Reed’s sudden exit. So he stepped up to the old-school corded microphone and killed that second time.

Vickie still believes that Zoe is trouble, which is where Billy’s surprisingly good advice helps. Whether ‘Zeed’ pops or fizzles, Vickie is clearly allowing herself to be influenced by Mr. Abbott’s advice. That means she’s already reopened her heart to a two-time husband. And with that, ‘Villy 3’ could be greenlighted for production at some point this spring or summer.