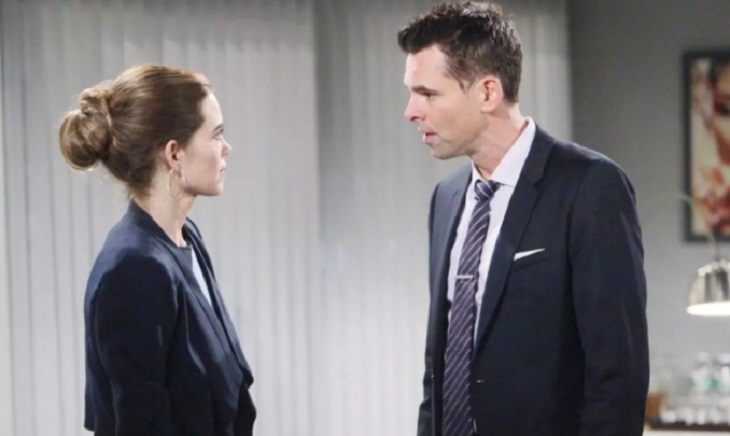 Victoria (Amelia Heinle) has wanted Billy (Jason Thompson) back for awhile on ‘The Young and the Restless’. In order for that to happen Phyllis (Gina Tognoni) will need to be pushed out, or leave ‘Philly’ of her own accord.

Passive-aggressive is one of the looks the Newman group fronts for its enemies. All members of this contingent, which can’t honestly be called a family, have employed the strategy Vickie is currently using. However, success has varied and often been fleeting where personal issues are concerned.

Related: The Young and the Restless Spoilers: Nikki’s Risky Gamble – Victor Won’t Take Her Back

Lately, Vickie has flashed a big smile to Phyllis whenever Billy has been around. Meanwhile, images of the former Mrs. Abbott weeping in the near future color Miss Newman’s fantasies. That result happened because Billy booted Phyllis from his life. But those thoughts aren’t exactly day dreams, instead they’re desired projections.

The ongoing war between Billy and Jack (Peter Bergman) factors directly into what happens between Vickie, Billy and Phyllis. Yes, Billy was purposely placed in between both ladies in that last sentence. Actually, that’s where he’d prefer to be.

How great it is for this somewhat reformed lout? He has two options, whereas Vickie and Phyllis are both focused on him. Each woman is intelligent and attractive, so soapy plotting has positioned Billy as the only romantic option in their lives.

Billy is committed to Phyllis for the moment. But that emotional decision feels fully fluid. Vickie is the mother of his children and his true love. Phyllis is, well, something else.

The distrust that’s growing between Billy and Phyllis will increase Vickie’s role as Mr. Abbott’s sounding board. Plus there’s the preexisting built-in double whammy, where personal contact through the kids and the Brash and Sassy setup keep this two-time married couple entangled in each other’s lives.

Phyllis has few paths to progress at this point. Possibly ‘Philly’ was always destined to be short-lived. It may simply have always been destined as a placeholder between what ‘Villy’ was and what it will be again.

Soap Opera Spy is a leading source for everything linked to ‘The Young and the Restless’.  more Y&R spoilers right here!Check back for

EastEnders Spoilers: Will Justice Be Served In Walford?