The Young and the Restless Spoilers: Vickie and Billy Drawn Together – Kids Keep Villy Option Open 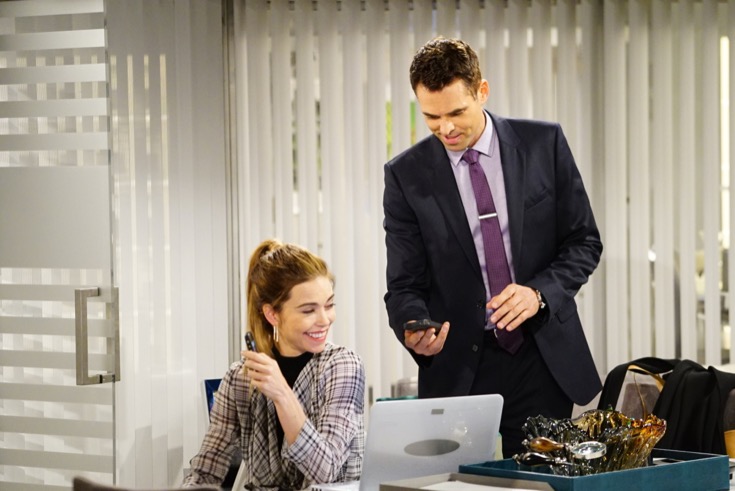 There’s no doubt that Vickie (Amelia Heinle) and Billy (Jason Thompson) are soul mates on ‘The Young and the Restless’. But will they ever fully reconcile and remarry (again)? Well, the odds of another ‘Villy’ reunion appear to increase whenever Johnny (Holden and Ryan Hare) and Katie (Sienna Mercuri) are in a scene. So let’s explore the current possibility.

Mr. Abbott surely wants his family back. But the former multiple-time Mrs. Abbott is standing on the soapy fence in this regard. It’s totally understandable that Vickie is leery of committing to Genoa City’s reigning playboy. Billy is as charming as he is inconsistent and thus the rub with taking him back.

Couple Vickie recently seeing Billy sitting by his mother’s bedside in the hospital with the images of him and Johnny at Crimson Lights with the young Mr. Abbott’s newfound kissing girlfriend. Yes, Vickie’s heart was touched twice.

Some might have been convinced that Thompson wasn’t the right choice to assume the Billy role after he took over in January 2016. But his daytime credentials were solid, as ten-plus years on ABC’s General Hospital previously confirmed. However, former head writer Chuck Pratt, Jr. wrote the Billy character toward a dark, eventual dead end.

Pairing Billy and Phyllis (Gina Tognoni) seemed like an idea people would talk about, then instantly reject. A novice fantasy baseball drafter might have picked those two characters for their same team, but a veteran Y&R watcher never would have.

If no better option is written into Miss Newman’s aura, lay odds at 2-1 that Billy will give Vickie a real wedding ring, instead of a tattooed one this time around. Open-minded viewers will always give any character a chance to redeem herself. What? Were the readers fooled by the non-use of the word himself at the end of the last sentence?

Yes, Vickie can redeem herself for having forgotten Billy’s good qualities. That’s why she’s been so surprised lately. And yes, Mr. Abbott does need to be better, indefinitely, to the only woman he’s every truly loved.