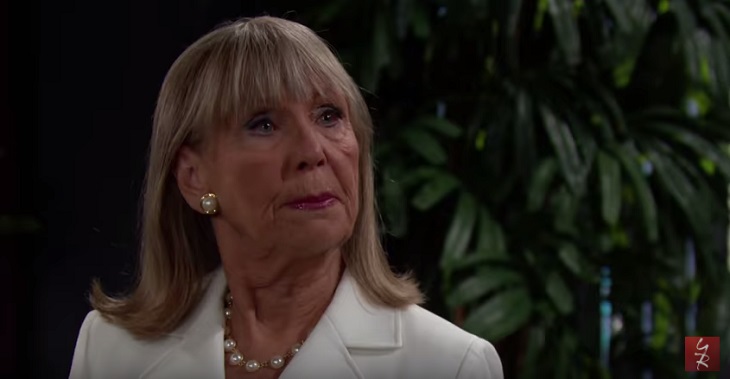 “The Young and the Restless” spoilers for Tuesday, September 26, tease that Ravi (Abhi Sinha) will fill Ashley (Eileen Davidson) in on some big news. At Jabot, Ravi admits that Dina’s (Marla Adams) password was used to access the confidential files. Meanwhile, Dina and Jack (Peter Bergman) argue about the cabin photos. She insults Nikki (Melody Thomas Scott) and warns of a war with Victor (Eric Braeden).

Jack defends his romance and eventually kicks Dina out of his office. At Brash and Sassy, Victoria (Amelia Heinle) complains about Jabot’s new plan to revive their classic line. Victor suggests that he has some revolutionary products in his arsenal. He offers to sign them over to Victoria so she can step up her game. Billy (Jason Thompson) isn’t thrilled about the agreement, but Victoria feels like it’ll work out.

Back with Jack, he learns Dina’s password was used on another computer. He demands to know who’s behind it and Ravi fills him in a little later. Jack and Ashley (Eileen Davidson) fume when Ravi announces that Phyllis’ (Gina Tognoni) laptop was involved. Ash wants her out of the building immediately.

At Brash and Sassy, Phyllis arrives as Billy and Victoria are discussing the info they stole off her laptop. Dina runs into Victor in the elevator. He notes that Jack won’t become a target on a personal level. At Crimson Lights, Mariah (Camryn Grimes) tells Tessa (Cait Fairbanks) and Devon (Bryton James) she can’t make it to the recording studio. She claims she has some work to take care of.

Once they’re gone, Mariah runs into Kevin (Greg Rikaart). They head back the Chancellor mansion for a chat. When Kevin asks about Devon, Mariah admits that he’s a fantastic guy. However, she’s attracted to someone else. Kevin assumes it’s a guy, but Mariah corrects him. She eventually admits that she kissed a woman she has deep feelings for.

Mariah points out that Tessa’s relationship with Noah (Robert Adamson) has made everything more complicated. Kevin suggests that love doesn’t always make sense. He thinks Tessa deserves to hear all of this from Mariah. Afterward, Mariah catches up with Tessa at the recording studio. She wants to tell Tessa the truth about how she feels.

Kevin heads over to the ranch and receives updates from Victor. He’s assigned another secret mission, which involves getting info from Nikki’s phone and email account. In Dina’s suite, Graham (Max Shippee) assures Dina that sending the pictures was the right move. Victor owes Dina now and that could be helpful.

Graham badmouths Dina’s kids and wonders if Ashley inherited her distrust from her real father. He gets nosy, but Dina won’t reveal anything else. Once Dina leaves, Graham gazes at a picture of a little boy. “The Young and the Restless” spoilers reveal that Graham’s revenge plot will soon be in motion.

It sounds like Y&R has some great scenes in the works. We’ll keep you posted as other details and rumors emerge. Stay tuned to the CBS soap to see what’s next in Genoa City.