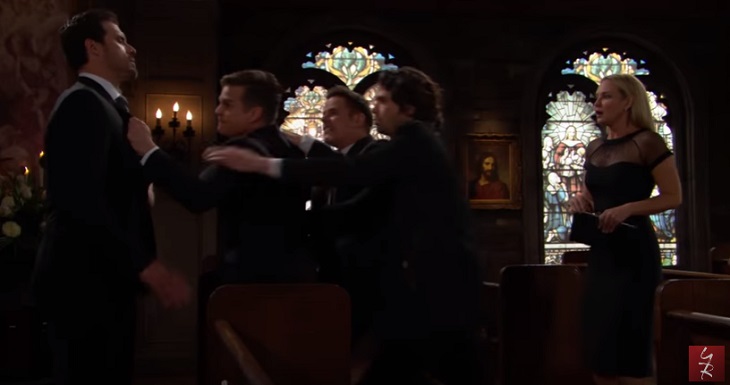 “The Young and the Restless” spoilers for Tuesday, June 6, tease that Kevin (Greg Rikaart) will have a major outburst. At the memorial service, Kevin rips into Nick (Joshua Morrow) and Chelsea (Melissa Claire Egan for pushing Chloe (Elizabeth Hendrickson) to the edge. After Michael (Christian LeBlanc) and Scott (Daniel Hall) break things up, Chelsea and Nick hurry out.

Kevin gets up to speak about how much he loved Chloe. He vows to be a good father to Bella (Gia Poeme) and the service eventually concludes. Kevin wants a moment alone with Chloe’s casket. He gets emotional as he offers an apology for failing her. When the casket lid suddenly opens, Kevin passes out.

Meanwhile, Nick and Chelsea worry about the drama they caused. He offers reassurance and they make plans for a concert outside with the boys. They hope that their lives will calm down a bit soon. “The Young and the Restless” rumors hint that Nick and Chelsea will face more bombshells instead!

Across town, Hilary (Mishael Morgan) urges Juliet (Laur Allen) to be confident in her case against Brash and Sassy. She insists that Juliet can bring down Cane (Daniel Goddard) in a big way. At the office, Victoria informs Billy (Jason Thompson) that he’s not the one named in the document. She also takes a call from Lily’s (Christel Khalil) agent, who hopes to free his client up a little for other work.

Victoria secures a meeting with Lily and Cane to discuss a couple of issues. She talks over the agent’s demand with Lily before turning her attention to Cane. After Lily leaves, Victoria stuns Cane with the sexual harassment news. She admits that Juliet specifically named him in the lawsuit.

At Crimson Lights, Billy spots Juliet and questions her decision to sue. She stays tight-lipped about her case, but promises Billy that she’s not coming after him. Reed (Tristan Lake Leabu) sees Mattie (Lexie Stevenson) at the coffeehouse as well. He asks her to watch him play at The Underground, but she doesn’t think she can. Mattie blames homework and dashes off.

Reed and Billy take a moment to catch up afterward. They put their recent tension behind them as they bond about their female confusion. Mattie returns home and brings up the idea of going to The Underground. A suspicious Lily wonders if this is about a guy.

Mattie doesn’t say much, but confesses that she likes someone who attends another high school. It sounds like this Y&R romance could come with complications. We’ll give you updates as other details emerge. Stay tuned to see what’s ahead on the CBS soap.

WATCH: The Young and The Restless Preview Video Tuesday June 6