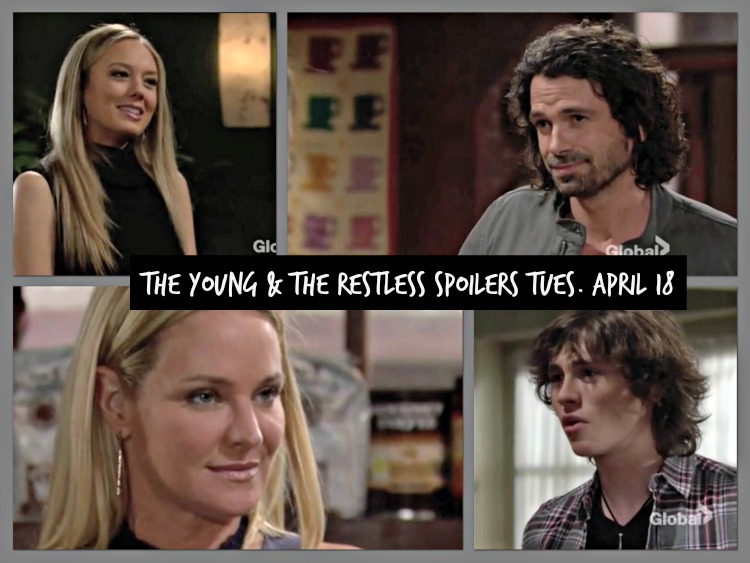 “The Young and the Restless” spoilers for Tuesday, April 18, tease that Scott (Daniel Scott) will decide to be bold. He’s been growing closer to Sharon (Sharon Case) lately, but he hasn’t made his move yet. It seems the time will finally be right on Tuesday. Scott will ask Sharon if she’s free tonight and she’ll wonder what he has in mind.

Some playful banter will ensue when Scott hints that Sharon should say yes to find out. “The Young and the Restless” spoilers state that Scott will convince Sharon to go out with him. They’ll eventually head to the movie theater for a good film and a giant tub of popcorn. It’s nice that Y&R is doing something a little different for this date night.

Related: The Young and The Restless Preview Video Monday, April 17

Elsewhere, Reed (Tristan Lake Leabu) will struggle with some intense emotions. He’ll open up to Billy (Jason Thompson) about how he’s feeling. Reed won’t understand why Victoria (Amelia Heinle) has turned against him. She’s refusing to let Reed keep his new car, so that’s obviously causing some major conflict.

Reed will point out that they had actually started getting along. He won’t get what changed. When Reed asks what’s wrong with Victoria, Billy may not have an answer. He’s just as perplexed as Reed is right now.

Later, Billy and Phyllis (Gina Tognoni) will heat things up. Victoria doesn’t want to let Billy in the loop on her family’s secret, so she’s pushing him away. Billy will misinterpret the situation and it’ll lead him straight back to Phyllis. “Philly” will hit the couch for some steamy reunion sex in Tuesday’s episode.

Other “Young and the Restless” spoilers say Abby (Melissa Ordway) will feel like she’s on top of the world. Victor (Eric Braeden) has appointed Abby as Newman’s acting CEO. Victoria will show up to see Victor in his office, but she’ll find Abby instead. As she flashes a big smile, Abby will explain that Victor left town and put her in charge.

Victoria might express doubt in Abby’s ability to run the company. She usually has something to say about her sister’s lack of experience. Nevertheless, Abby will remain confident that she can get the job done. She’ll be so glad that Victor had faith in her.

Will Abby run into problems while Victor is gone? Does disaster await Newman Enterprises? We’ll give you updates as other news and rumors emerge. Stay tuned to Y&R and don’t forget to check Soap Opera Spy often for the latest “Young and the Restless” spoilers, rumors, updates and news.

The Bold and the Beautiful Spoilers: Thomas Rips Into Sally for Her Betrayal – Coco Rages Over Being Used as Spectra’s Pawn

Days of Our Lives Spoilers Week Of April 17-21: Chad Fights for His Marriage, Abigail Feels She Can’t Bring Him Happiness – John Reunites with Marlena