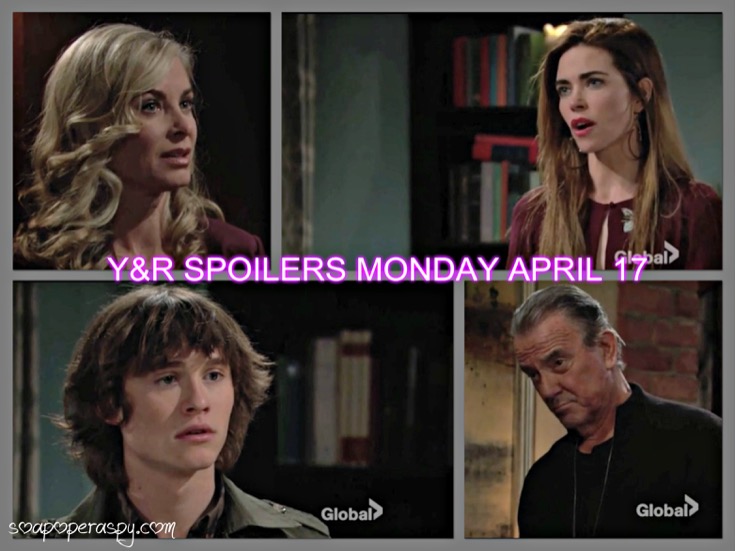 The Young and the Restless spoilers for Monday, April 17, tease that Abby (Melissa Ordway) will get some great news. At the ranch, Victor (Eric Braeden) reveals that he wants Abby to be Newman’s acting CEO. Abby wraps her arms around Victor and happily accepts the position.

At Brash and Sassy, Jordan (Darnell Kirkwood) and Juliet (Laur Allen) discuss the upcoming photo shoot with Lily (Christel Khalil). When Cane (Daniel Goddard) arrives, he learns the shoot is out of town. Jordan suspects that something’s up with Cane. He questions him about it privately. Cane brushes off Jordan’s concerns, but has a faceoff with Juliet a little later.

Cane suggests that Juliet is sending Jordan and Lily off together because of the Tokyo romp. Juliet promises it has nothing to do with the sex session. They agree to just forget it and move on. Meanwhile, Ashley (Eileen Davidson) praises Ravi (Abhi Sinha) for helping her out in New York. The conference has been going well.

Ravi wants to head out for some dumplings, but Ashley has a change of plans. Benjamin Hochman hopes to have a business meeting with Ashley. He thinks they should do it over dinner. Ravi isn’t pleased when Ashley accepts the offer. Benjamin recently got a divorce and Ravi thinks he could be on the prowl.

When Ashley sits down with Benjamin, he gets a little flirty. Unfortunately, his phone interrupts them one too many times. Ashley gets fed up and leaves. She finds Ravi, who’s hanging out with a couple of friends. Ravi thinks they can go get those dumplings now, but Ashley decides to head to her room instead.

Other “Young and the Restless” spoilers say Reed (Tristan Lake Leabu) will be thrilled over his new car. At The Underground, Reed celebrates his new wheels by taking picture with his pals. Victoria (Amelia Heinle) and Nikki (Melody Thomas Scott) fume over Victor’s gift. They agree that Reed needs to give it back.

Later, Victoria fills Reed in and the angry teen stomps off. Billy (Jason Thompson) wonders why Victoria is reacting like this, but she’s not interested in explaining. Victoria tells Billy to leave and he obeys her orders.

Back at the ranch, Nikki arrives as Abby is headed out. She gets updates on Abby’s promotion and snaps about Victor buying her loyalty. Nikki contends that Victor was hoping to do the same thing by sending Reed the car. She adds that Victor wanted to retaliate against Victoria, too.

Nikki storms out of the room, but eventually comes back to finish their fight. She notes that she’s glad Faith (Alyvia Alyn Lind) left. The girl is innocent and doesn’t need to be around Victor. When Vic grumbles about how he’s being treated, Nikki scoffs at his victim act. Y&R fans won’t want to miss this epic confronation.

WATCH: The Young and The Restless Preview Video Monday, April 17