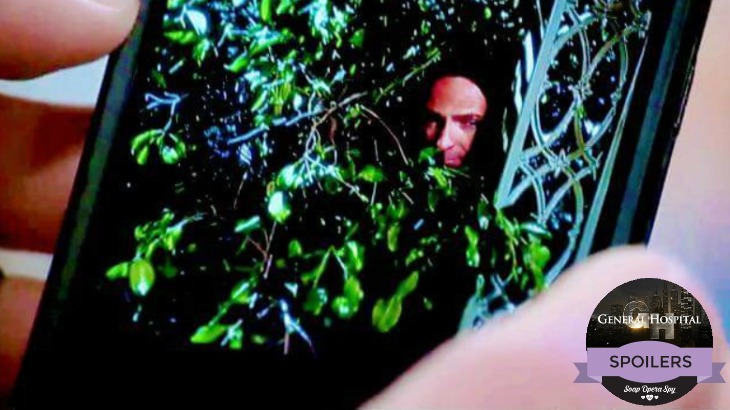 The Friday April 14th episode of General Hospital begins with Lulu (Emme Ryan) telling Charlotte (Scarlett Fernandez) they can look for bunnies again on the next visit. Charlotte would like to do a tea party. Valentin (James Patrick Stuart) walks in the doorway. Lulu reminds him she has 10 minutes left. Miss Watkins agrees there is still time left on the visit. Charlotte is ready to go home with her Papa. She thanks Lulu for the Easter Basket and leaves. Miss Watkins tells Lulu the visit went much better than she anticipated. Lulu agrees and hugs her.

Dante (Dominic Zamprogna) at Metro Court asks Lucy if she can clarify her statements about the robbery at the Floating Rib. Ava (Maura West) steps off the elevator and sees them talking. Lucy avoids answering Dante’s question about Morgan’s pill bottles. Lucy says she has a meeting with Ava regarding some art. Lucy can count on Jerome Gallery every year supporting the Nurses Ball.

Lucy lies and says she can’t help him with the medicine bottles. Dante leaves. Ava tells Lucy to keep her mouth shut and Dante will move on. Lucy fears he won’t. Ava reminds Lucy she can make her disappear if she doesn’t remain silent.

Related: 44th Annual Daytime Emmy Awards News: Here’s How You Can Watch The 2017 Emmy’s This Year!

Jason (Billy Miller), Sam (Kelly Monaco), Danny (T.K. Weaver), Alexis (Nancy Lee Grahn) and Scout are at the park for a picnic and Easter egg hunt. Alexis feels each time she convinces herself Julian is really gone, something happens to make her question it. Alexis tells them about the lamp being on when returning home, the photo album out and a picture missing.

Jason questions Alexis why she thinks someone broke into her home to steal a picture. There was no sign of a break in but Julian could use his key. Jason says he’ll look into it for her. Danny brings flowers to Alexis. He gives Scout one of the eggs he found.

Kiki (Hayley Erin) is at Dillon’s (Robert Palmer Watkins) house studying. Dillon interrupts wanting to take photos outside with his new camera. Kiki agrees to go outside and model for some photos for him. She mentions being nervous about the engagement dinner party that Tracy (Jane Elliott) is throwing for Ned (Wally Kurth) and Olivia (Lisa LoCicero). Dillon is finished taking the photos and Kiki wants to get back to change her clothes before dinner. Dillon will meet her at dinner as he wants to take more photos. 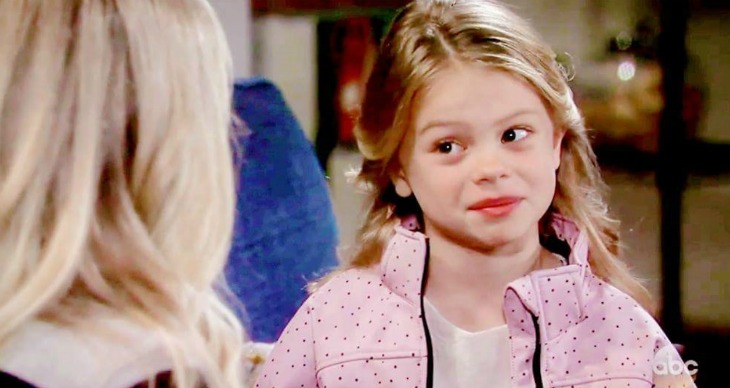 Dillon sees Jason and his family at the park and starts snapping pictures. Alexis mentions she would like copies of the photos. Dillon shows Alexis and Sam the photos he has already taken. Jason takes the camera to look at the photos. He seems someone hiding in the bushes. He zooms in on the photo and it’s Julian (William deVry). Later Dillon is home dressed for the party and Kiki arrives. Dillon compliments on her dress. He suggests they go upstairs to his bedroom as they’re still time before dinner begins.

Sonny (Maurice Benard) on the docks as Michael (Chad Duell) walks up. Sonny considering a trip to South America is in order, because he’s thinking about killing somebody. Sonny tells Michael he didn’t cheat on his Mother but she sure cheated on him with Jax.

Michael hopes Sonny and Carly can forgive each other since the truth is out. Sonny can’t forgive or forget when it comes to Jax. Michael tells Sonny how Jax paid Frank Benson for the kidney. Sonny blames Jax for this whole mess. Sonny’s angry that Carly slept with Jax even knowing Jax is responsible. Sonny leaves.

Valentin and Charlotte have lunch at the Metro Court. Valentin agrees to have an Easter egg hunt when they get home. Charlotte mentions missing her Mommy and confused how Lulu can be her Mommy too. Valentin says she was created in a special way but he’ll explain more when they get home so Nina can help explain it too. Charlotte is glad he married Nina but she likes Lulu too. Nelle walks in and asks Charlotte if she would like to go to the Easter egg hunt in the park. Charlotte prefers to go home. Charlotte tells Papa he owes Lulu 10 minutes on her next visit.

Dante arrives home to find Lulu crying. Lulu tells him happy tears because the visit with Charlotte went so well. Dante tells Lulu about talking to Lucy and Ava earlier. Dante’s not giving up and noticed Ava seemed squirrely.

Jax (Ingo Rademacher) brings Carly (Laura Wright) flowers. Jax asks how she’s feeling. Carly still furious with Sonny for lying to her and calls Nelle (Chloe Lanier) a lying snake. Doorbell rings and its Nelle. Nelle tells Carly she’s sorry for everything she did and it was because of what her father told her for years.

Nelle hopes Sonny and Carly can get back together now. Carly says it’s too late. Nelle used Morgan’s death to target Carly’s family. Carly warns Nelle she will make her pay. Nelle reminds her that she and Sonny didn’t have sex. Carly calls her a “slut” but Jax defends Nelle. Nelle tries to explain her motivation.

Jax offers to give Nelle all the money she needs to start fresh away from Port Charles. Nelle refuses the money and says she wants to stay to make things right with everyone. Carly says she’s staying for Michael. Carly admits Nelle is how she was years ago. Carly tells Nelle go for trying to make amends, but Michael will always be too good for her. Carly throws Nelle out of her house. Carly feels she’s just like Nelle. Jax disagrees because she doesn’t destroy what she loves. Sonny starts knocking on the door yelling for Carly. Carly opens the door and Sonny barges in. Sonny yells at Jax this is his entire fault!