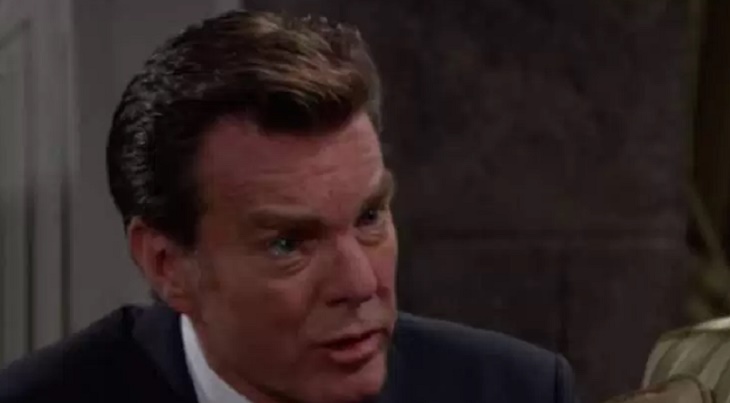 Jack (Peter Bergman) was bluffed hard by Lauren (Tracey Bregman) on ‘The Young and the Restless’. The crossover appearance Eric Forrester (John McCook), from ‘The Bold and the Beautiful’, was nicely done. Eric’s willingness to pretend to be a potential silent investor allowed Lauren to get a better deal from Jabot. That wink at both character’s past personal link and the understood reference to B&B as Y&R’s spinoff show was also fun.

Ashley (Eileen Davidson), who has history with the characters on B&B as well, was against the Fenmore takeover deal from the moment Jack told her about it.

Then, when it appeared as though Lauren’s bluffed counteroffer was going to be too much for Jack to accept, she shook her head in disapproval. However, ‘Smilin’ Jackie-boy’ agreed to only purchase 49 percent of Fenmore’s and give Lauren an additional 25 percent on top of what he originally offered.

Why would the CEO of Jabot be so enamored with this particular fashion-related company, especially when it had produced declining profits for awhile? The answer is Phyllis (Gina Tognoni), but not in the way that everyone thinks.

Jack believes that Phyllis’ computer design skills are key to this deal. Once he learned that his former wife had taken her act to Fenmore’s, Ravi’s (Abhi Sinha) worth exploded. So, if he has that skill set under contract why be so hot for the former ‘Red’?

Phyllis knows Jack’s flaws, as he knows hers. But Ravi’s resume only includes genius, rather than wisdom and knowledge of the players who Jabot deals with in this particular arena. Jack believes that he’s over Phyllis and he well may be. By reacquiring her in this deal Jack thinks he’s secured Jabot’s perimeter, while also increasing its digital potential exponentially.

Yes, his vision isn’t purely based in logic. But emotional thinkers like Jack Abbott (and Phyllis) have sometimes succeeded when going with their gut instincts. Of course they’ve failed at times as well, but ego often shades those memories.

‘The Young And The Restless’ News: Michael Muhney Discusses Y&R, Plus Mistakes He’s Made In New Podcast – Listen HERE!