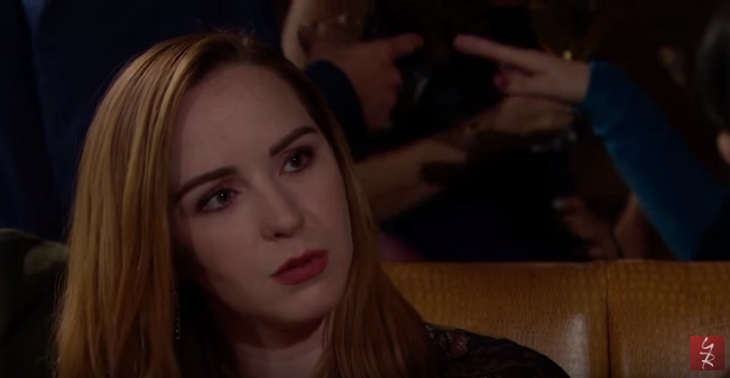 “The Young and the Restless” spoilers for Friday, October 20, tease that Tessa (Cait Fairbanks) will get a pleasant surprise. At the athletic club’s gym, Tessa and Noah (Robert Adamson) are thrilled to hear her song playing. Devon (Bryton James) walks in and notes that the streaming service was just installed. They all plan to meet up at The Underground to celebrate Tessa’s success.

Devon finds Mariah (Camryn Grimes) and invites her, but she doesn’t seem too happy about it. When Devon seems puzzled, Mariah covers and insists she’s looking forward to it. Later, Mariah and Tessa have an intense discussion. Tessa’s glad Mariah decided to join the group, but Mariah snaps that she’s not sure why.

Noah and Devon join them briefly to make a toast. They wander off and Tessa states that Noah treats her better than any other guy ever has. Mariah mentions Tessa sometimes acts like she doesn’t want to be a with a guy at all.

They get to the heart of the matter and Tessa acknowledges that she sent mixed signals. She’s sorry, but wants to stick with Noah. Tessa feels like Mariah can find happiness with Devon, too.

Back at the athletic club, Phyllis (Gina Tognoni) finds out that Victoria (Amelia Heinle) made a deal with Hilary (Mishael Morgan). She hints to Hil that Victoria won’t realize she’s being used. Hilary doesn’t quite get it. Juliet’s (Laur Allen) feeling emotional with Cane (Daniel Goddard) nearby. They discuss his job as Chancellor’s acting CEO and the fact that Lily (Christel Khalil) took Juliet’s old position.

At Brash and Sassy, Lily urges Victoria to be careful when she goes on Hilary’s show. She knows Hilary will do anything to get people to tune in. Lily also grills Victoria about the huge budget for the men’s line. Victoria promises they’ve got it under control. Afterward, Billy (Jason Thompson) worries that they’re moving too fast on this. Victoria believes they’re doing the right thing.

Phyllis chats with Jack later about Victoria’s upcoming TV appearance. Since Victoria’s going to promote the men’s line, everything’s going according to plan. Jack’s too focused on Dina to deal with this, so he wants Phyllis to take the lead. He warns that she can’t show her hand, especially this late in the game.

Phyllis gets all dressed up and finds Billy at Top of the Tower. They dance and enjoy some sexy talk. Billy doesn’t want to do anything to jeopardize the love the share. Elsewhere, Hilary and Lily clash over Victoria’s upcoming interview. Lily contends that Hilary had better play by the rules.

In the dining room, Cane and Victoria get into a fight over what went down with Ben Hochman (Ben Hermes). She eventually tosses a drink in his face. Juliet rushes over and stands up for Cane. Once Victoria exits, Julie struggles with some pain. Cane wants Juliet to move in the Chancellor mansion so he can keep an eye on her.

Later, Victoria’s car slams into something and she’s left unconscious. It sounds like an exciting “Young and the Restless” episode is on the way. We’ll give you updates as other Y&R news and rumors emerge. Stay tuned to see what’s ahead on the CBS soap.