‘The Young and the Restless’ Spoilers Friday February 24: Noah Demands The Truth About Dylan – Michael Confronts Gloria – Jill Holds Jack to His Offer 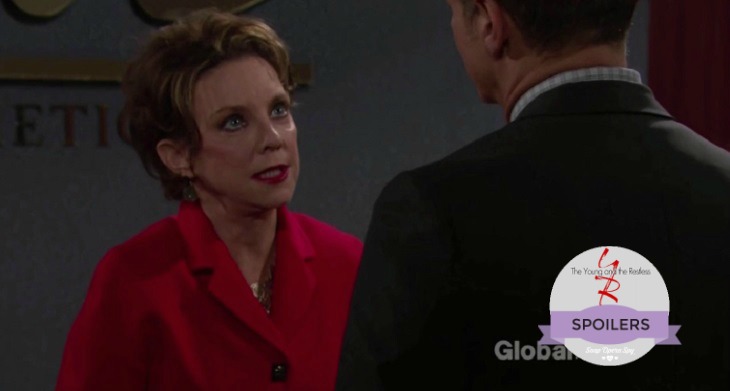 “The Young and the Restless” spoilers for Friday, February 24, tease that Noah (Robert Adamson) will have some questions for Sharon (Sharon Case). A recent chat with Nikki (Melody Thomas Scott) sparked some confusion. When Noah acted like Dylan (Steve Burton) was wrong for running off, Nikki was quick to defend him.

Noah will approach Sharon and mention this odd conversation. “The Young and the Restless” preview video shows Noah saying, “Grandma said Dylan didn’t have a choice. What did she mean by that?”

Sharon will look a little unsettled. She knows it’s important to keep quiet about Dylan’s new life. Sharon doesn’t want to put him in any danger.

However, Noah may not accept whatever explanation Sharon comes up with. He’s pretty good at figuring out when his mom is hiding something. Noah definitely suspects that Sharon and Nikki have a secret.

When Noah refuses to let this go, how will Sharon react? Will she blab? We’ll have to wait and see, but Y&R spoilers hint that Sharon will make some form of an admission. Perhaps Sharon will tell Noah the truth if he promises not to breathe a word to anyone else.

Meanwhile, Michael (Christian LeBlanc) will wonder what’s going on at Jabot. He’ll notice that Jack (Peter Bergman) and Gloria’s (Judith Chapman) relationship is becoming increasingly complicated. The line between love and hate seems to be blurred.

“The Young and the Restless” spoilers state that Michael and Gloria will have a confrontation in Friday’s episode. Gloria will insist that it hurts her deeply when Michael shuts her out. Michael will be equally chagrined that Gloria is lying about how she got her job. He knows her skills weren’t what scored her the position.

Later, Michael will try to get some answers from Jack. He’ll hope he can find out what Jack’s agenda is. Y&R spoilers say Jack will be surprised when Michael starts hurling accusations. Michael will argue that Jack is must be plotting Gloria’s downfall.

Jack will also have to deal with Jill (Jess Walton) on Friday. She’ll declare that he made a solid offer and she’s going to hold him to it. Of course, there are still some details to sort out. Thanks to Colin (Tristan Rogers), Jill doesn’t have all the cash she needs.

Will Colin get the money somehow? Could that help him patch things up with Jill? We’ll give you updates as more news and rumors emerge. Stay tuned and don’t forget to check Soap Opera Spy often for the latest “Young and the Restless” spoilers, rumors, updates and news.