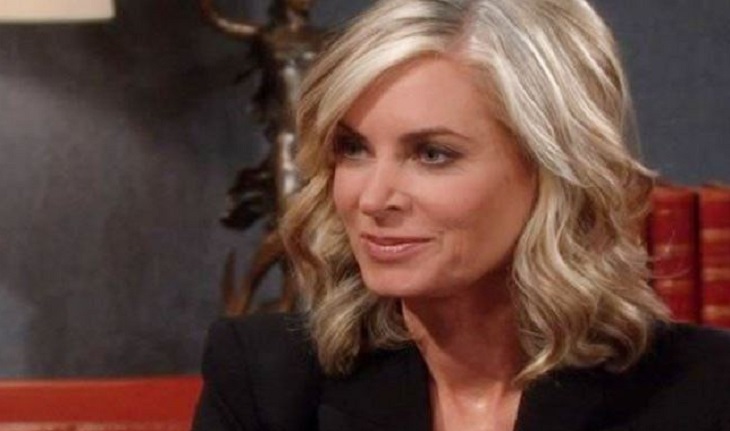 The Young and the Restless (Y&R) spoilers state that Ashley Abbott (Eileen Davidson) discovers one of Graham’s (Max Shippee) big lies. During the week of September 18, Ashley plans to go to Dina (Marla Adams) armed with the new info, urging her mother not to trust him.  Will Dina believe her daughter?

Ashley snuck into Graham’s hotel room and found a bill for a retirement home in Florida.  She decides to call the facility to try to figure out why Graham would be footing the bill for someone at the center.  She discovered that Mrs. Bloodworth was Graham’s mother.  Yes, the same mother he claimed recently passed away.  In Ashley’s mind, this is the “ah ha” moment, and she feels like it’s proof that Graham is a liar and probably trying to con her mother out of money.

Is Graham A Risk To Dina?

The Young and the Restless spoilers reveal that Ashley fears that Graham would harm her mother to get his hands on his inheritance money.  Ashley feels that the fact that Mrs. Bloodworth is alive and kicking proves that.  Her only fear is that her mother won’t see it that way.

CBS Soaps In Depth reports that Ashley cannot help but feel frustrated that Dina refuses to see what a con-artist Graham is. She believes that this is enough evidence to prove her case, but worries that Dina will continue to make excuses for him.

Ashley Goes To Dina With The Scoop

Armed with the information, Ashley goes to Dina to prove that Graham is not a good person to have in her trusted circle. However, she is immediately put on the defensive when Graham answers the door and lets her in to see her mother.

Y&R spoilers indicate that Dina lectures her daughter about going into Graham’s room without permission. Dina repeats herself by stating that Graham only has her best interest at heart and she cannot fathom why Ashley cannot see that.

Ashley asks to speak to her mother alone and asks her if she knows anyone at Hillcrest Active Living Residence in Florida.  Of course, Dina tells her no and isn’t sure why she is asking her about the facility. Does Ashley tell her about Graham’s mother? Or, does Ashley assume that she is just wasting her time trying to convince her that Graham is nothing but a con-artist?

Despite her fears, Dina warns her again that if she keeps up her behavior towards Graham, it will damage their new relationship. Ashley believes that she must warn and save her mother from this man before it’s too late.  Stick with Soap Opera Spy for more The Young and the Restless (Y&R) spoilers, news, and casting updates

Dancing with the Stars: 7 Fast Facts About Barbara Corcoran