‘The Young and The Restless’ POLL: Who Do You Want Billy With Phyllis Or Victoria? VOTE! 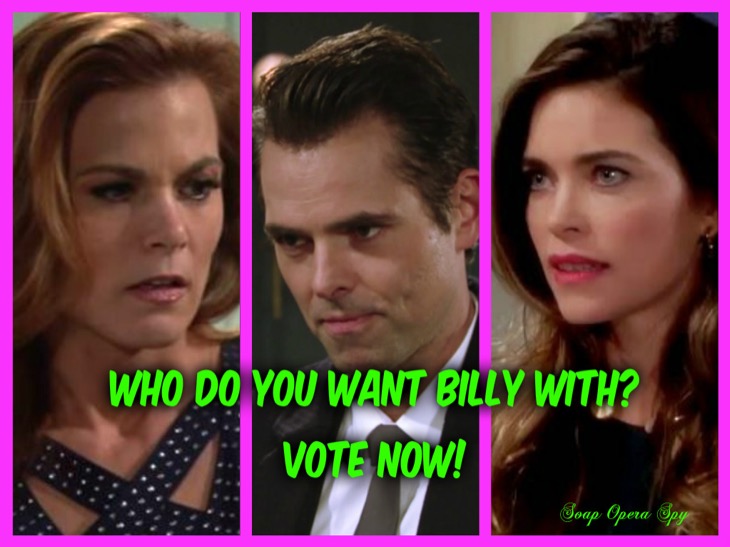 We have all witnessed on “The Young and the Restless” Billy Abbott (Jason Thompson) having his little fling with Phyllis Newman (Gina Tognoni) and now he is trying to get back in the good graces of his ex-wife Victoria Newman (Amelia Heinle). So who do you think is the best woman for Billy?

In recent events Billy Abbott has been spending a lot more time around his ex-wife Victoria not only at work but at her home too that they once shared together. Billy has been doing a great job keeping Victoria grounded since her son Reed Hellstorm (Tristan Lake Leabu) has came back in the picture. She has been keeping Billy at arms length but is now realizing she needs his help. So with them spending more time together would you like to see them back together and have their family back under one roof? They seem to be good for each other.

Then we have Phyllis Newman! There is no denying the chemistry that they share. Even though it was so wrong for what they did to Jack Abbott (Peter Bergman) the two had some pretty hot scenes. Phyllis seems to keep Billy on the straight and narrow. Most fans enjoyed seeing those two together and have even been talking over social media saying that they would like to see them as a couple. Phyllis seems to be moving on from Jack, so there’s always that chance that her and Billy could rekindle their old flame?

Then again, Billy Abbott may be better off to just move on from both ladies. Maybe even bring someone new in the picture for him. He’s been down that road so many times before with Victoria and being with Phyllis will only damage his relationship with his brother Jack Abbott even more. So Y&R fans it’s time to weigh in and see who you all think Billy should be with? Stay tuned to CBS’s “The Young and the Restless” to see what the future holds for Billy Abbott.

General Hospital Spoilers: Will Julian Jerome Take Down Franco To Save Alexis?