The Young and the Restless POLL: Is Nick Still in Love With Sharon? VOTE! 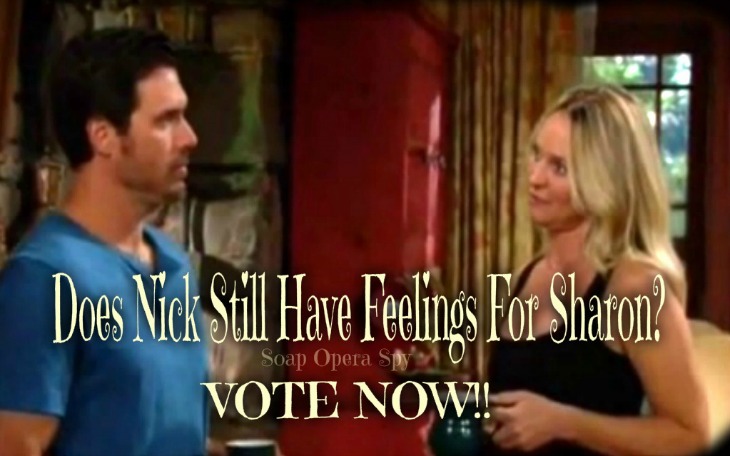 The Young and the Restless (Y&R) former super couple Nick Newman (Joshua Morrow) and Sharon Collins McAvoy (Sharon Case) have been together off and on since 1994; both having done some pretty nasty things to each other including infidelity and swapping of DNA tests. Is it possible they could find themselves back in each others arms?

Y&R’s Sharon and Nick, fondly named “Shick” by fans, are currently involved with other people: Sharon with Scotty Grainger (Daniel Hall) and Nick with Chelsea Lawson Newman (Melissa Claire Egan); but the truth is you cannot deny what the heart wants. It is clear Nick has some unresolved feelings when it comes to his ex-wife and current sister-in-law, Sharon as he seems to be jealous of her new relationship.

Related: The Young and the Restless Spoilers: Lily Unable To Stand By Her Man – Cane’s Behavior Forces Issue

Sources reveal there is trouble ahead for the current lovebirds as Nick is hiding the secret that his father, Victor Newman (Eric Braeden) is the one who brought Chloe Mitchell (Elizabeth Hendrickson), working with her on setting up his son, Adam (Justin Hartley). He may not have ordered it, but Adam’s presumed death was a direct result of this; how could Chelsea forgive Nick for covering for his father?

The Young and the Restless’ Chelsea Newman is not innocent when it comes to Nick either. She is hiding a whopper of a secret too. She knows that Nick is not the biological father to Christian, and in fact, Adam is his father. She may be keeping the truth hidden in honor of Adam and Sage’s (Kelly Sullivan) wishes, but there is no way Nick would stay with her when the truth comes out.

Sharon may have done some pretty dastardly things to Nick and his family, mostly committed while she was in a bipolar manic state. She has been married to both of Nick’s brothers, Dylan McAvoy (Steve Burton) and Adam Newman (then-Michael Muhney) and his father, Victor; but the biggest thing most Y&R fans can’t get over is the fact that she kept baby Christian aka Sully as her own while Nick struggled, mourning the tragic loss of his wife.

There is no denying that Nick and Sharon have a lot of chemistry; attempting to move on with life seeing other people. They always fall back together, almost like they are each others safety net. Could Scott and Chelsea end up being casualties of these lovers’ undeniable connection?

Related: The Young and the Restless RUMOR: Juliet Pregnant? – Claims Cane is Baby’s Dad When He’s Not

Based on Y&R’s Nick’s actions, do you think he still loves Sharon, in spite of everything she has done? Please take our poll and let us know what you think. Be sure to tune into CBS’ The Young and the Restless (Y&R) to catch up on everything happening in Genoa City right now. Check Soap Opera Spy often for updates, news, rumors and spoilers!