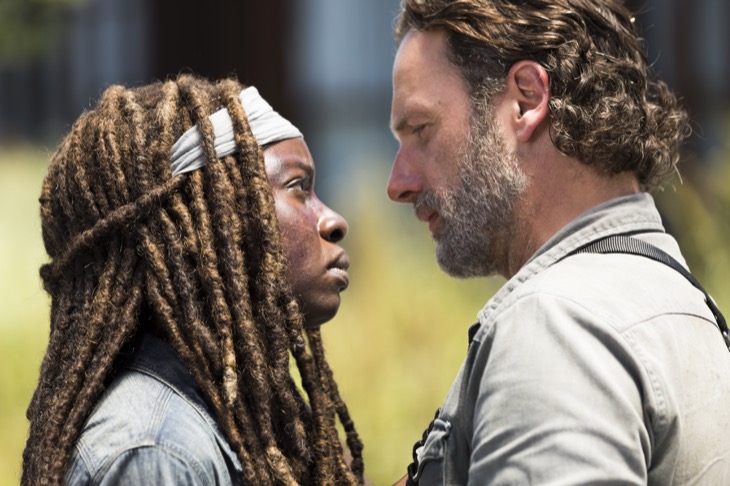 The Walking Dead Season 8 spoilers explain how the Savior baby, Gracie, will affect Rick Grimes. In a video posted on AMC’s official website, actor Andrew Lincoln discussed the pivotal moment. Knowing how Rick is and how much he values family, how will seeing the baby change his outlook on “All Out War?”

Moments before entering the room, Rick murdered Gracie’s father. Upon walking in and seeing a baby sleeping peacefully in her crib, Rick was shocked. It is a moment that he will never forget. Not only did he leave this child without a father, but he has to consider the repercussions of war.

“Rick realizes that the man he’s just killed that was fighting ferociously not only for his own life, but for the life of his daughter. And it spins him into orbit.”

The Walking Dead Season 8 spoilers tease that Rick Grimes understands that there are innocent people at the Sanctuary. However, he never imagined there would be children or babies. It makes sense, though, since there are kids at the other communities. These include Carl (Chandler Riggs,) Judith and Maggie’s (Lauren Cohan) unborn child.

There are probably other children at Hilltop and the Kingdom that fans just haven’t met yet.

“Rick, in that moment, realizes he’s not the person he thought he was.”

The Walking Dead Season 8 spoilers highlight that fact by forcing Rick to look at himself in the mirror, which is by the crib. He is quite literally forced to face himself and what he has done. Now, what will he do about it? That is the big question and that answer will come in the next few episodes.

For a hint, pay attention to the velveteen rabbit that was in Gracie’s crib. It could be coincidence, but it looks like the same one that the little girl was holding in Rick’s dream sequence. Keep watching the AMC series and check back with Soap Opera Spy for the latest in The Walking Dead Season 8 spoilers, updates and news.

The Young and the Restless (Y&R) Weekly Spoilers November 6 to 10: Someone Will Die – Hilary Out To Get Jordan – Sharon Finds Crystal