The Walking Dead (TWD) Season 8, Episode 3 Spoilers: What Happens with Rick and Morales? 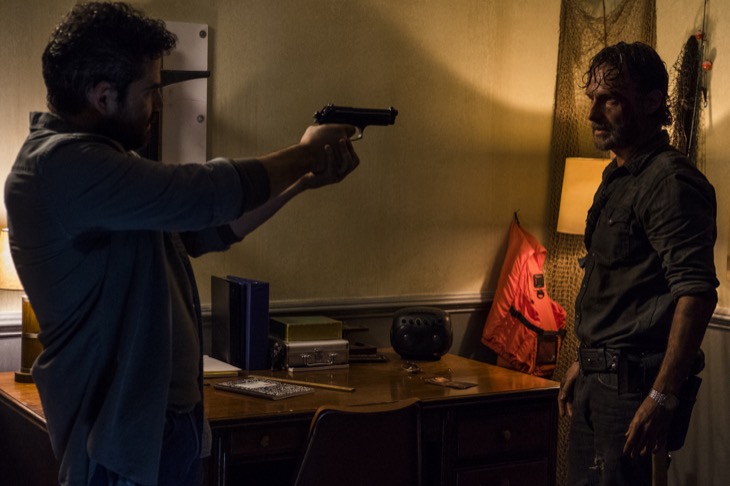 The Walking Dead season 8, episode 3 will show fans what happens with Rick Grimes (Andrew Lincoln) and Morales (Juan Pablo Pareja.) What can everyone expect in the next episode, which is titled “Monster?”

At the end of the last episode, the menacing Savior was holding Rick at gunpoint. However, this is not the first time the two men have crossed paths. As long-time viewers know, Morales was in the first season. Out of the many group members, he and his family decided to go their own way instead of joining the others to the CDC.

“The Walking Dead” season 8 spoilers indicate that something happened to turn Morales so mean. Even though he knew Rick, he promised to deliver him on a platter to Negan (Jeffrey Dean Morgan.) Did something happen to his wife and children? How long has he been at the Sanctuary? Will he end up doing the right thing, or will Rick have to be saved?

In a new behind-the-scenes video, executive producer Tom Luse discussed Morales in “The Walking Dead.” The fight to live has gone from battling the undead to survive the assault from other survivors.

“In Morales, [Rick] sees someone… who’s not that much different from himself. That’s really a huge shock to Rick.”

“The Walking Dead” season 8 spoilers hint that Morales’ story will probably unfold. His return has been speculated for several weeks. However, it was not confirmed until last Sunday. To have him killed right away would leave too many open holes. Fans want answers, especially what led to him join the Saviors and what happened to his family.

However, Rick is going to have to survive first. Right now, it doesn’t look like Morales is willing to let Rick escape. Perhaps he can do some fast talking, or more likely, someone else will subdue Morales. To find out for sure, fans are just going to have to tune in next Sunday night.

Keep watching the AMC series and check back with Soap Opera Spy for the latest in “The Walking Dead” season 8 spoilers, updates, and news.

The Young and the Restless (YR) Spoilers: Jack and Billy Reconcile – Combine To Fight Victor