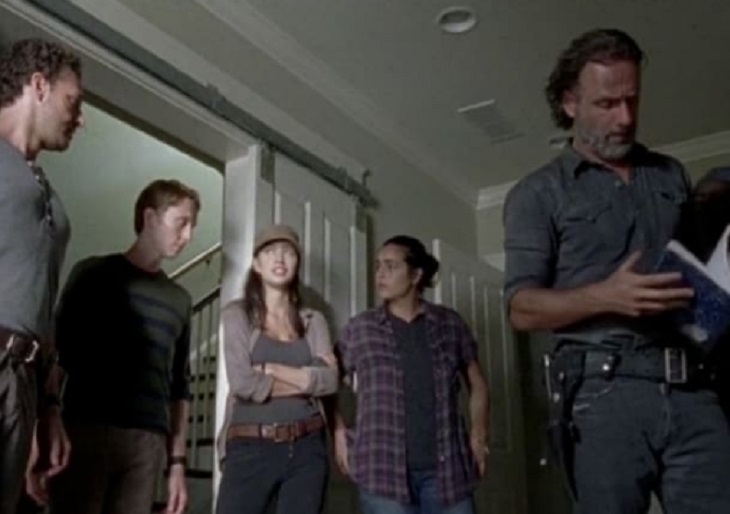 After watching the mid-season premiere of “The Walking Dead” it has left fans with many questions. One being, where is Father Gabriel (Seth Gilliam).

In the “The Walking Dead” Season 7B premiere we watched as Gabriel loaded up all the supplies he could get his hands on and put them in a car and drove away, but one thing some fans did not notice is that Gabriel had a passenger. So could someone have made Gabriel take off or do you think he has an accomplice and is up to no good?

There are many possibilities for what could be going on with Gabriel, but when Rick Grimes (Andrew Lincoln) and his group found the notebook, which had the word boat written in the back, they took it as a sign of where he could be. So could they be right?

It has been confirmed that some characters will be switching sides in the remaining episodes. So, maybe that’s what the writers want us to think. As Rick and his crew were looking for Father Gabriel, they stumbled upon a new group that is being referred to as the Garbage Pail Kids online. Even though they surrounded Rick and his group, that did not wipe the big smile off of Rick’s face. After seeing how large the group was, we finally saw Rick crack a smile from ear to ear for the first time in a long time.

After not being able to get King Ezekiel (Khary Payton) to work with him, it seems Rick may have found a group that will. That is why he is smiling so big because he sees a large group of people in front of him, that he is sure he can convince to be on his side.

TWD spoilers tease that Season 7 episode 10 is titled “New Best Friends” and it teases, “While searching for a missing Alexandrian, Rick and his group encounter a mysterious collective, it’s inhabitants unlike any they have came across.”

So, with the title being labeled New Best Friends it appears that Rick and his group will make friends with these people. If he can get them on his side, they will definitely have the numbers they need to bring down Negan (Jeffrey Dean Morgan) and the saviors. However, King Ezekiel may soon have a change of heart as well. Stay tuned to AMC’s “The Walking Dead” to see how this all plays out.

‘Days of Our Lives’ Spoilers: Chloe Gets Custody of Holly – Nicole Has a Meltdown, Dumps Deimos – Gabi and Chad Kiss