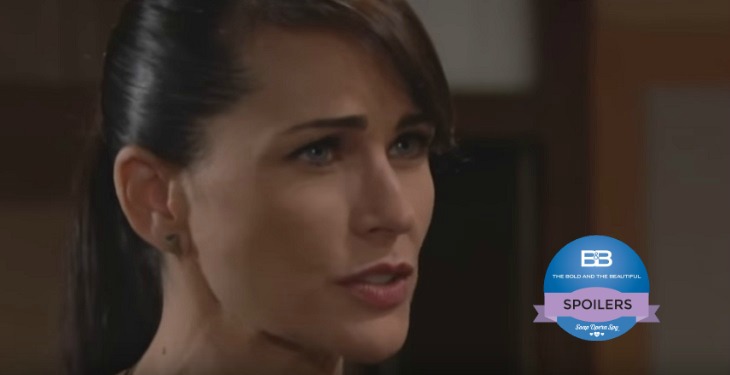 “The Bold and the Beautiful” spoilers for Thursday, January 19, tease that Quinn (Rena Sofer) will fear her kiss with Ridge (Thorsten Kaye) could come back to haunt her. Ridge agreed to keep his mouth shut, but can he really be trusted? Quinn won’t know if she should buy Ridge’s claims. After all, he was plotting to take her down before the trip.

Thursday’s B&B preview video shows Quinn saying, “You have wanted me out of your father’s life for so long…I can’t believe you’d be willing to keep this secret.” Ridge will promise that his view has changed. He doesn’t want to destroy Quinn and Eric’s (John McCook) marriage anymore. Ridge hates to admit it, but he can tell that they’re good for each other.

Ridge will assure Quinn that their secret is safe and there’ll be no blackmail. However, this incident will always be in the back of Quinn’s mind. There are a few ways this could go down the road.

Ridge might turn against Quinn and expose her if she pulls a stunt. Truly falling for Quinn might be another option. If Ridge had no ulterior motive for that kiss, then there was obviously some form of a love connection. Regardless, “The Bold and the Beautiful” rumors hint that Quinn has some tough times ahead.

Elsewhere, Liam (Scott Clifton) will urge Steffy (Jacqueline MacInnes Wood) to follow her heart. He’ll insist that he’s sick of Wyatt (Darin Brooks), Quinn and Eric’s manipulation. Liam will point out that Steffy chose him. He’ll think that means they should be together right now. Liam won’t think they need anyone’s permission to be in love.

“The Bold and the Beautiful” spoilers say Liam will finally draw the line. He’ll want Steffy to clear things up with Wyatt and come home. If she doesn’t, Liam intends on leaving town. There’s no reason for him to stay without a real commitment.

Meanwhile, Wyatt will share his deepest desires with Eric. He’ll want to find someone who believes in him completely. Wyatt can see that Eric and Quinn have that kind of relationship. Eric will encourage Wyatt to hang in there. Perhaps he’ll come across the strong bond he’s looking for one day.

It sounds like Steffy and Wyatt’s marriage will officially come to an end soon. Unfortunately, some problems will also emerge for Liam and Steffy. We’ll give you updates as other news comes in. Stick with B&B and don’t forget to check Soap Opera Spy often for the latest “Bold and the Beautiful” spoilers, rumors, updates and news.

WATCH: ‘The Young and The Restless’ Preview Video Thursday, January 19