‘The Bold and the Beautiful’ Spoilers: Katie Refuses to Back Down, Insists Brooke Should Confront Ridge – Quinn Worries She’ll Lose Eric 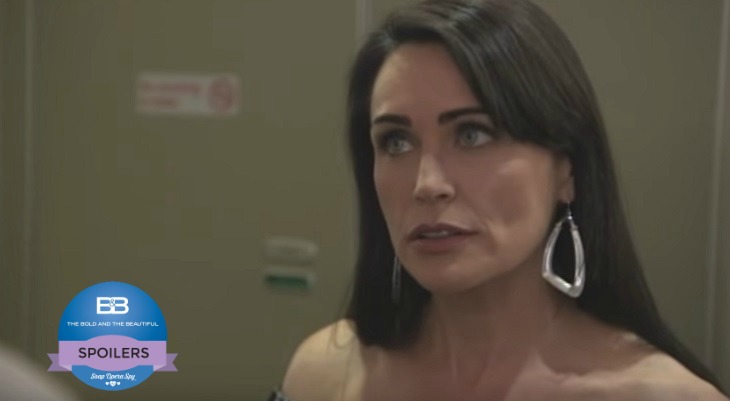 “The Bold and the Beautiful” spoilers for Wednesday, March 15, tease that Brooke (Katherine Kelly Lang) and Eric (John McCook) will talk about their current state of bliss. They both feel like everything is going so well. Eric will think Ridge (Thorsten Kaye) finally realized there’s no woman in the world who’s better for him than Brooke. She’ll just be pleased that they found their way back to each other.

Eric will also believe his own relationship with Ridge is on solid ground. He’ll note that he’s beginning to trust Ridge again. Brooke will agree that Ridge loves his father and his loyal to him. She’ll suggest that their bond will continue to grow stronger. Unfortunately, it looks like big trouble is brewing instead.

“The Bold and the Beautiful” fans know that Ridge and Quinn (Rena Sofer) have a secret. Now that it’s starting to spread, it’s causing major drama. Quinn will still be worried that the truth could get back to Eric. She’ll speak with Ridge about her concerns and he’ll attempt to ease her mind.

B&B’s preview video shows Quinn saying, “I don’t ever want to lose your father.” Ridge replies, “You’re not going to lose anything. Neither am I.” Ridge certainly seems confident that this will work out, but he’s in for a shock down the road.

There’s no way Quinn and Ridge will get off scot-free. Katie (Heather Tom) will try to make sure of that. She’ll insist on having an intense conversation with Brooke in Wednesday’s episode. The sneak peek clip shows Katie declaring, “I’m not crazy. I’m not blind. You have to talk to Ridge and get to bottom of it.”

Katie will give Brooke updates on another one of Ridge and Quinn’s close interactions. She’ll be convinced that cheating is a real possibility. Katie will maintain that there’s a deeper connection between them. She doesn’t think Brooke should tie the knot without addressing this situation.

Related: The Bold and the Beautiful: Best of Weddings

Meanwhile, Sally (Courtney Hope) will find herself stuck in a predicament that’s familiar to B&B viewers. On her flight to Australia, she’ll get sandwiched between the same passengers who annoyed Quinn on her journey to Monte Carlo. Matt (Jim O’Heir) and Kieran (Monica Horan) will definitely make Sally’s trip a little more interesting.

WATCH: The Young and The Restless Preview Video Wednesday, March 15