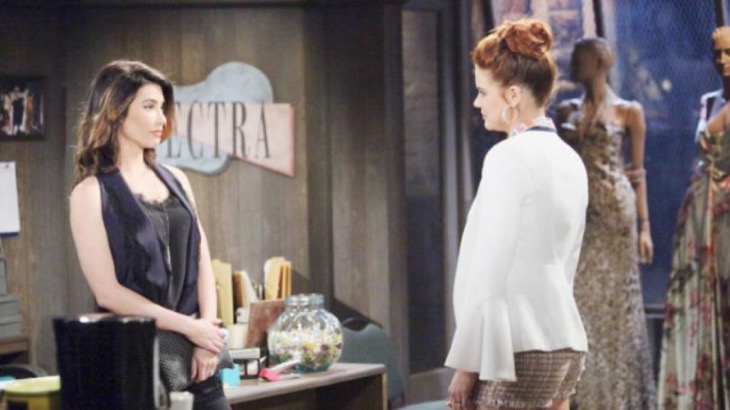 Bold and the Beautiful spoilers tease Sally Spectra (Courtney Hope), and Steffy Forrester (Jacqueline McInnes Wood) could end up being friends. Liam Spencer (Scott Clifton) has started to give Sally a chance, and it would lead to his wife, Steffy giving the red head a chance, too.

Several months ago, Sally told Steffy that if she would have never stolen the designs, she felt like they could be friends. However, Steffy wasn’t so sure, since they come from two completely different worlds. Steffy pointed out that her family has done nothing but steal and profit from Forresters’ hard work.

Bold and the Beautiful spoilers indicate that Liam may encourage Steffy to give Sally a chance. Of course, it is unlikely she would ever trust Sally enough to call her a friend, but Liam would settle for being friendly with her instead of giving her the evil eye every time she sees her.

Sally had hoped that Steffy could stop seeing her as a threat and judging her so harshly. At this point, it is unlikely that Steffy would bury the hatchet. She isn’t ready to accept Sally as a friend. Right now, she is doing everything she can to make sure Sally stays away from Thomas Forrester (Pierson Fode) too.

To say that Sally and Steffy would be friends would mean that they both would have to wipe the slate clean and start over. With these two women, it doesn’t appear that either head-strong women are ready to do that.

Jacqueline Wood McInnes shared that it would be difficult for Steffy to let the drama go with Sally. Since her arrival in town, she has pulled one scheme after another. Steffy is sick of defending herself and her family to her. It’s just an added insult that her brother, Thomas fell in love with her.

So, if the Bold and the Beautiful fans want to see these two beauties partner up and be BFF’s, they could have a long wait. It is unlikely that will happen anytime soon. Do you think Steffy will ever soften her stance against Sally?

Stick with Soap Opera Spy for more Bold and the Beautiful spoilers, news, and casting updates!

The Young And The Restless Spoilers: Kevin Fisher Will Return, Here’s Why Chloe Will Not