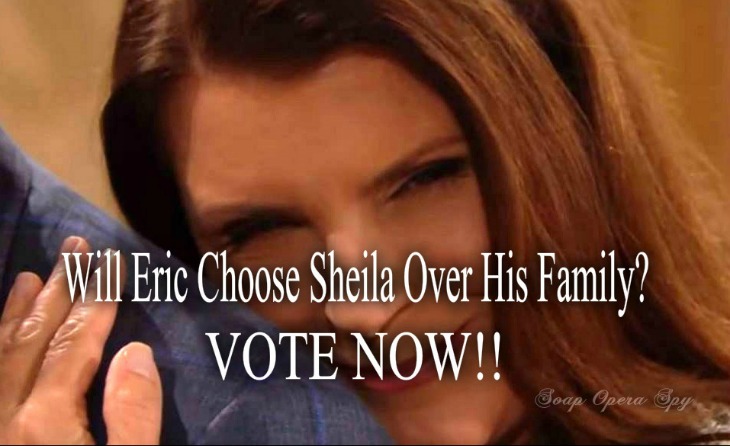 The Bold and the Beautiful (B&B) spoilers reveal fans were left hanging when Steffy Forrester (Jacqueline MacInnes Wood) and her husband, Liam Spencer (Scott Clifton) arrived at Eric Forrester’s (John McCook), Steffy shot Sheila when Liam shouted Sheila Carter (Kimberlin Brown) had a gun. Being shot may not have been part of Sheila’s plan but B&B fans can be sure it only helps her end game!

Sheila Carter returned to Los Angeles, claiming she was there to apologize for all the dastardly deeds she has done years ago to the Forrester and Logan families but it quickly became clear she hasn’t changed a bit and will do anything to reunite with the beloved Forrester patriarch.

The Bold and the Beautiful’s Eric is still married to Quinn Fuller (Rena Sofer), but Sheila threw a wrench into the union by revealing to Eric that his wife was flirting and kissing his son, Ridge Forrester (Thorsten Kaye); her plan seems to be going off without a hitch when Eric unexpectedly moves out of the mansion and into a hotel giving Sheila easier access to him.

Eric has been acting unusual lately, he kicked out Ridge from his life, even calling him by his biological father’s name Marone. He vanished without telling anyone where he was going, refusing to take any calls. He has been drinking alcohol and passing out in his bed while Sheila watches over him. He has been looking unkept, which is very odd for a man running a fashion empire! Could Sheila be drugging Eric to ensure he relies solely on her?

Now that The Bold and the Beautiful spoilers have revealed Steffy shot Sheila, this could be the final nail in the coffin for Eric and his family and friends. He was betrayed by his wife and son; his dear friends Brooke Logan Spencer (Katherine Kelly Lang) and her sister, Katie Logan (Heather Tom) both knew what was going on and didn’t reveal it to him and now his granddaughter shot Sheila who was unarmed and clearly not a threat.

Could Steffy’s act of violence help Sheila in successfully ripping Eric from his family for good? Please vote and let us know what you think. Be sure to tune into CBS’ The Bold and the Beautiful (B&B) to catch up on everything happening in and around the Los Angeles fashion world, and don’t miss what happens to Sheila after she was shot. Check Soap Opera Spy often for updates, news, rumors and spoilers!