The Bold and the Beautiful POLL: Who is Crazier – Quinn Forrester or Sheila Carter? VOTE! 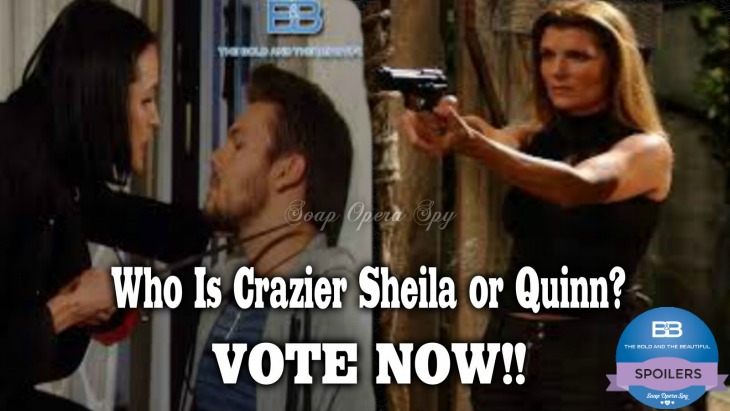 The Bold and the Beautiful (B&B) has had its share of insanity and crazy people through the years but none quite like Quinn Fuller Forrester (Rena Sofer) and Sheila Carter (Kimberlin Brown). Maybe it’s something in the air of Los Angeles but it seems these two are over the top when it comes to crimes they have committed.

B&B’s Quinn has done a lot of dastardly things that surprisingly haven’t landed her in jail nor a mental facility, although the same can’t be said for Sheila.

Quinn has done so many things to Liam Spencer (Scott Clifton) that its hard to even name them all. She has trapped him in a steam room, hoping to suffocate him. She stabbed him with his own sword necklace; something she had also done to his father Bill Spencer (Don Diamont).

Related: The Bold and the Beautiful Sean Kanan Shares New Pics From the Set of His New Film

She shoved Ivy Forrester (Ashleigh Brewer) into the Seine River to prevent Liam from marrying the love of her son, Wyatt Spencer’s (Darin Brooks) life, Hope Logan (Kim Matula). Quinn was also accused of causing Hope to miscarry after she was forbade to see her; but the biggest and craziest stunt she ever pulled was probably when she took Liam hostage and pretended to be his wife when he had amnesia.

The Bold and the Beautiful’s Sheila Carter isn’t much better. While in Genoa City, she had kidnapped infant boy, Scotty Grainger from Lauren Fenmore (Tracey E. Bregman) after her baby died. She faked her death on numerous occasions, allowing people to ease their minds and feel safe, only for her to return.

When she became infatuated with Eric Forrester (John McCook) she threatened baby Rick’s nanny, who got into a car accident leaving her paralyzed. She changed the paternity test of Bridget Forrester, making it seem that Ridge was her father. She, like, Quinn, likes to hold people hostage including Lauren and the entire Forrester clan.

Sheila has been a nightmare in Los Angeles where she had shot several people, including, Stephanie Forrester (Susan Flannery), Brooke Logan (Katherine Kelly Lang) and Taylor Forrester (Hunter Tylo). She poisoned both Stephanie and Lauren and in an act of preservation she murdered the plastic surgeon who made her look like Phyllis Summers (then-Michelle Stafford).

Related: The Bold And The Beautiful Spoilers: B&B Casting SHOCKER – Kimberlin Brown Back As Sheila Carter!

Is there now end to their reign of terror? Quinn seems to have mellowed out, now that she has married Eric Forrester Sr., but now it seems Sheila has it out for her, could it be because Quinn has what she wants? Which of these two women do you feel is crazier than the other? Please take our poll and let us know what you think.

The Bold And The Beautiful (B&B) Spoilers: Finn See Liam As The Enemy –…