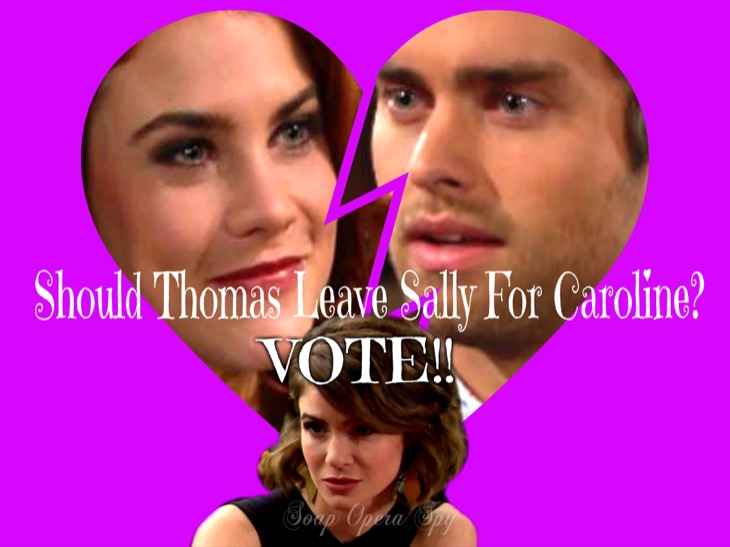 The Bold and the Beautiful (B&B) spoilers reveal Thomas Forrester (Pierson Fode) has been put into a very difficult situation; he is caught between two women he loves – Caroline Spencer (Linsey Godfrey) and Sally Spectra (Courtney Hope). Who do you think Thomas should be with and do you think he should leaves Sally to be with Caroline, who he believes is dying?

B&B’s Thomas Forrester had literally given up any hope on being with Caroline and raising their young son, Douglas together as a family unit when Caroline left Los Angeles, claiming she needed time to think and figure out what she wanted after her marriage to Thomas’ father, Ridge Forrester (Thorsten Kaye) hit a sour note when she revealed that she was pregnant with Thomas’ baby.

Once they decided to give their relationship a chance – Caroline bolted, leaving Thomas alone, heart-broken and vulnerable. How can Thomas trust that this time Caroline will stick around, especially when they hit a rough patch?

Spitfire Sally Spectra came to LA a few months later, and Thomas was instantly intrigued by the eccentric and beautiful redhead. Sally wasn’t looking for a man as all her focus was on resurrecting her great aunt Sally’s (the late-Darlene Conley) legacy Spectra Fashions fashion house. Thomas fell quickly for her quirky ways and how determined she was to show the world the Spectras could be as fabulous and famous as the Forresters.

Of course, B&B fans know she messed that one up by steals Forrester Creation Originals; but Thomas was able to see past that and see the potential Sally had. He turned against his family and not only rescued Sally from jailtime but left his cushy job at Forrester Creation to co-own Spectra and help rise the fashion house out of the ashes.

The Bold and the Beautiful spoilers reveal both women have done wrong to Thomas Forrester, Sally may have stolen designs and cost Forrester Creations a fortune, forcing them to create a whole new fashion line; but Caroline attempting to win him back by faking a terminal illness may be a new low, even for her.

Be sure to tune into CBS’ The Bold and the Beautiful (B&B) to catch up on everything happening between Thomas, Sally and Caroline right now.

Greg Rikaart Coming Back To Y&R? Kevin Fisher On His Way Back to Genoa City?