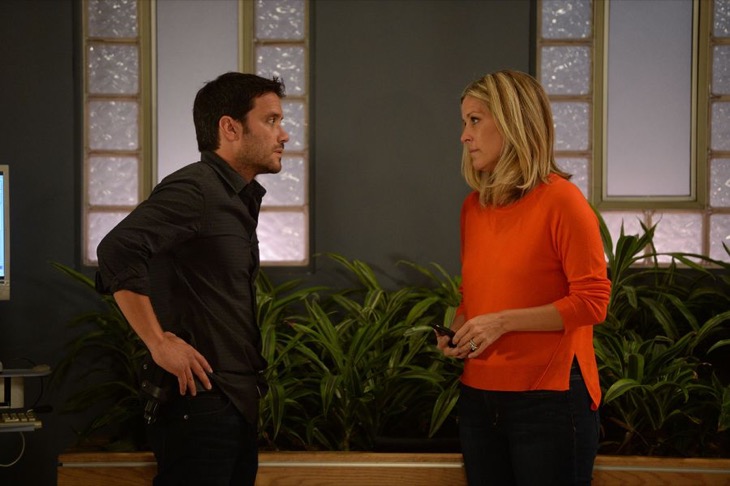 Friday begins with Scott (Kin Shriner) telling Julian (William deVry) the prosecution has called Alexis (Nancy Lee Grahn) as a witness for his trial. Scott feels Alexis can convince the jury Julian was forced to do those things and the jury will see him as a hero.

Oscar (Garren Stitt) asks Joss (Eden McCoy) to take a bike ride with them to celebrate Spencer (Nicholas Bechtel) being found. He wants to take her to a place with a killer view. Joss agrees to go but has to be back in one hour due to being grounded. They arrive to the site where Sonny is in the pit. Oscar picks something up from the ground and places it in his pocket. He tells Joss he doesn’t know what it is but figures he’ll find a use for it. Oscar shows Joss the area saying some the buildings will be demolished. Joss hears a noise so they check on their bikes. Later they arrive back to Joss’s house. Joss thanks Oscar and says she had fun. He’ll see her tomorrow at Lila’s Camp. Joss goes inside. Oscar takes the bullet casing out of his pocket he picked up off the ground earlier and smiles.

Sam has a vision of Sonny (Maurice Benard) and starts saying he’s in the ground and can’t hurt them anymore. Sam tells Jason to turn around. Jason tells Sam they are the only two in the room. Sam starts talking incoherently and suddenly passes out. Jason screams for help.

Finn, Griffin and Alexis run in to Sam’s room. Griffin pulls Jason and Alexis to the side to tell them the infection has causes encephalitis. Alexis sends Julian a text. Kristina tells Alexis that Scout is okay and hugs Jason. Finn tells them Sam is in a coma. Julian runs in and Alexis updates him on Sam. Jason reminds Julian how Sam had to deliver Scout. Kristina tells Julian how Sam hates him. Jason tells Alexis that Julian needs to be gone when he comes back from Sam’s room. Alexis tells Julian to leave. Sam wouldn’t want him there and it’s time she respects that. Julian leaves.

Jason asks Finn to give him a few minutes alone with Sam. Jason tearfully tells Sam he has no life here without her. He’ll sit by her bedside and wait however long it takes for her to wake up.

Carly (Laura Wright) tells Garvey (Rick Ravanell) to let Liz (Rebecca Herbst) go. Carly wants to know who shot him and what did he do to Sonny. Liz tells Carly that Garvey is bleeding. Garvey orders Carly inside to the supply closet while he continues to hold Liz hostage. Liz hands the keys over to Carly. Garvey starts coughing as Carly tells Liz to look out. Carly takes Garvey down and tells Liz to get help. Carly tells Garvey to tell her where Sonny is. Garvey tells Carly he killed Sonny.

Sonny sitting in the pit saying he has to stay awake. Sonny sees himself in Dante (Dominic Zamprogna). Always true to yourself and has courage and strength. Sonny says pass some his way as he’s going to need it. Sonny starts crying as he talks about Morgan. Sonny says Kristina doesn’t have a cruel bone in her body. Sonny wants to be Avery’s Dad. Sonny yells for help and then passes out.