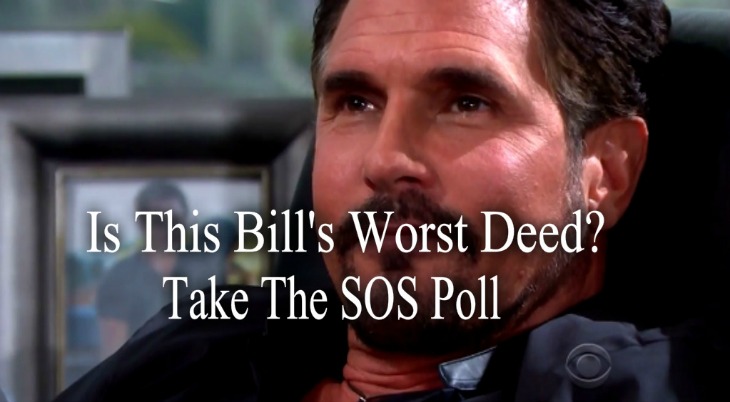 The Bold and the Beautiful (B&B) spoilers have revealed Bill Spencer (Don Diamont) will do just about anything for his favorite niece, Caroline Spencer (Linsey Godfrey); especially if he benefited from whatever her heart desired. Currently he is lying about her being terminally ill to Thomas Forrester (Pierson Fode), the father of her young son, Douglas, but do you think this is the worst thing Bill has ever done?

B&B’s Bill Spencer is a force to be reckoned with, proving on more than one occasion that when he wants something, he will do whatever it takes to achieve that. Remember when he initially arrived in Los Angeles in 2009? His one goal was to seek revenge for his father, he pressured Stephanie Forrester (Susan Flannery) to turn against Forrester Creations and Eric Forrester (John McCook), using the fact that Eric hired an illegal immigrant to work for him to destroy him.

What about when Bill took control of Forrester Creations, made his wife, Katie Logan (Heather Tom) the CEO, but began kissing a much younger, Steffy Forrester (Jacqueline MacInnes Wood)? Or course this isn’t the only fling or affair Bill has had, he repeatedly cheated on Katie with her sister, Brooke Logan (Katherine Kelly Lang) throughout their marriages.

The Bold and the Beautiful’s Dollar Bill Spencer has always had a mean streak about him, including when he planned to murder Amber Moore (Adrienne Frantz) who claimed his newfound son, Liam Spencer (Scott Clifton) was the father of her unborn baby after she refused to accept half a million dollars from him to leave town.

How about when Bill hated that his son could love a woman as meek as Hope Logan (Kim Matula); he worked with Steffy to make sure Hope would see her kissing Liam at his bachelor party and then forced Hope to watch Liam and Steffy get married in Aspen while she was trapped in a gondola, thanks to Bill’s mechanisms and when Liam decided he wanted to reunite with Hope, Bill made it look like Steffy had a life-threatening blood clot that could kill her if she got stressed.

The Bold and the Beautiful spoilers reveal Bill has done several dastardly things in his life and the majority of them have been self-serving so making up a fake illness for someone to get what he wants, is only one of the things he has done. It seems there is nothing that he would consider to be “crossing the line”. Do you think Bill lying about Caroline having a terminal illness is the worst thing he has ever done? Pleas vote and let us know what you think.

Be sure to tune into CBS’ The Bold and the Beautiful (B&B) to catch up on everything happening right now, and you do not want to miss what happens now that Bill has lied for Caroline. Check Soap Opera Spy often for updates, news, rumors and spoilers!

This Is Us Spoilers: Milo Ventimiglia Teases Filming Jack’s Death For Season 2