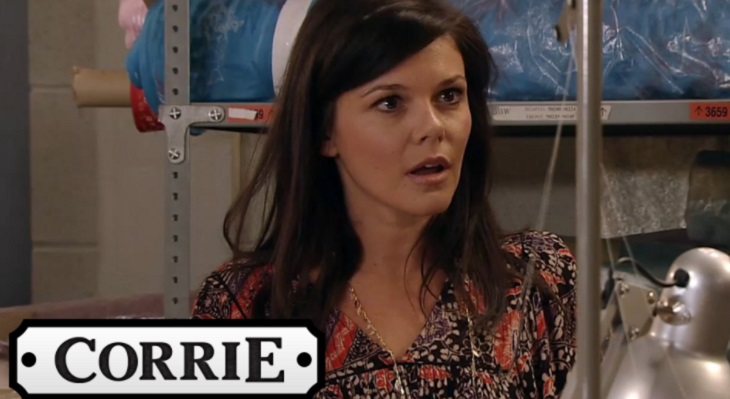 Coronation Street spoilers tease that viewers can expect a sizzling love connection for Kate Connor (Faye Brookes) this summer, the only question is: who’s the lucky Corrie lady?

It’s been a while (more than a year!) since Brookes dropped a hint or three that her alter ego would be involved in a passionate affair, but viewers have long memories, and they’ve been speculating like crazy now that a romance seems fixed on the horizon.

Brookes, winner of Best Newcomer award at the National Television Awards, has been tight-lipped about a possible partner for Kate, but recent Coronation Street rumors now point to Rana (Bhavna Limbachia) as the lucky one.

That’s right, Rana who is married! Clues include the close friendship between the two, plus Limbachia teasing that she and her husband will soon hit a rocky patch in their relationship.

The first hint of a relationship for Kate hit the news over a year ago, so a lot could have happened in that span of time. Perhaps the writers decided to go in a different direction, or maybe a new character will be introduced to sweep Kate off her feet.

Online sentiment was leaning heavily toward Kate’s partner being an already established character, but surprises are the order of the day on soaps! After all, Corrie execs have pulled a few amazing surprises on viewers these last few months, so all options are possible.

For their part, showrunners have been careful to keep the intrigue and suspense alive, and they have made no statements regarding Kate’s future. One thing is certain: It’s been a while since Kate was involved in a front burner plot, and her upcoming airtime is sure to please loyal fans of the long running ITV show.

The only question is, can they contain their anticipation in the meantime? Look for some dramatic complications to accompany this story when the ball does get rolling. Would Corrie viewers expect anything less from their favorite show?