The Bold and the Beautiful (B&B) spoilers reveal that Sally Spectra (Courtney Hope) will decide to leave Los Angeles for a little while, hoping to get a fresh perspective on her life. Poor Sally has had a rough few weeks.

First, Thomas Forrester (Pierson Fode) leaves her to take care of his dying baby’s mama, Caroline Spencer (Linsey Godfrey). Then, her whole fashion line goes up in smoke after Bill Spencer (Don Diamont) torching the building. Now, she feels responsible for the fire after she learns it was a preventable electrical fire.

Sally decides to visit Steffy Forrester (Jacqueline McInnes Wood) to let her know her plans. While she isn’t close to Steffy, she knows Thomas keeps in contact with his sister. B&B spoilers indicate that Sally is secretly hoping that Steffy will let Thomas know that she’s doing okay, but she feels it is best if she leaves town, at least for a little while.

The Bold and the Beautiful spoilers state that Steffy doesn’t understand why Sally won’t stay and rebuild her company. Of course, Sally would love to rebuild Spectra Fashions, but she isn’t sure she can pull it off without Thomas by her side. 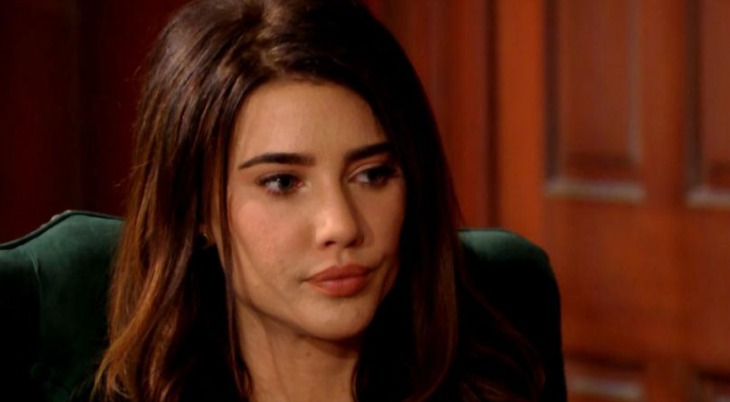 Steffy tries to talk Sally into staying. B&B spoilers state that Steffy wants Sally to stick around because she knows that she wasn’t responsible for the Spectra building fire —Bill was. However, Sally doesn’t know about Bill’s dirty deed and believes the fire was a result of faulty electrical fires.

Even though Steffy knows that Sally was at fault, she isn’t sure about letting Sally know that Bill was the cause of the fire. She knows that if she lets it slip out, then Sally could press charges against Bill. There’s no way Steffy wants her father-in-law in trouble with the police.

The Bold and the Beautiful spoilers suggest Steffy will listen to Sally, as she explains why she needs to get out of town for a few weeks. Steffy encourages her to contact Thomas, just to let him know about her plans. B&B spoilers suggest that just before she plans to leave Los Angeles, she discovers that the Spectra fire was no accident—-and Bill was responsible!

Stick with Soap Opera Spy for more The Bold and the Beautiful (B&B) spoilers, news, and casting updates!