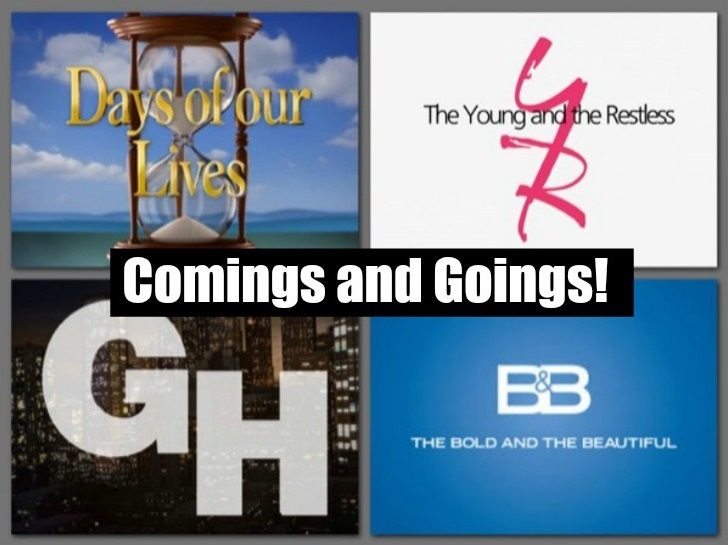 The casting scoop for The Young and the Restless (Y&R), The Bold and the Beautiful (B&B), General Hospital (GH), and Days of our Lives (DOOL) is here. There are a bunch of exciting things happening on each of the four soap operas during the week of September 18.

Dick Christie will return as Charlie during the week of September 18.

Aaron Spears will return as Justin Barbers on Thursday, September 21. He will share scenes with Scott Clifton (Liam) and Bill Spencer (Don Diamont).

Alex Wyse (Saul) and Danube Hermosillo (Darlita) will return on Wednesday, September 20.
The Young and the Restless

The Young & The Restless

Greg Rikaart will return as Kevin Fisher on Wednesday, September 20. CBS has been tight-lipped about his upcoming storyline.

Tina Ivlev will return as Natalia, one of Alice Johnson’s (Tamara Clatterbuck), sex ring girls. Will she return to reveal where Tessa’s sister is being held?

Days Of Our Lives

Bill Haynes will return as Doug Williams. He will share scenes with Susan Seaforth Hayes (Julie) and Kristian Alfonso (Hope). He was last seen in July.

Steve Burton will return to GH on Tuesday, September 19. The actor left the of Jason Morgan (Billy Miller) in 2012. His character’s name is not known at this time.

Agnes Olech debuted last week as Larisa, Ava’s (Maura West) clinic caretaker. She will return during the week of September 18.

Deborah Strang will take over the role of Franco’s (Roger Howarth) adoptive mother, Betsy Franco. She has appeared in 2010, 2013, and 2014. She is the real-life mother of the original Franco, James Franco.

It looks like an interesting week ahead. Who do you think Steve Burton will be playing? Why is Kevin Fisher back in Genoa City? Stick with Soap Opera Spy for more Soap Opera spoilers, news, and casting news!

Get Exclusive The Young and The Restless News & Updates!