Neighbours Spoilers: Russell Stirs Up Drama From Beyond The Grave – Brennan Brothers Divided 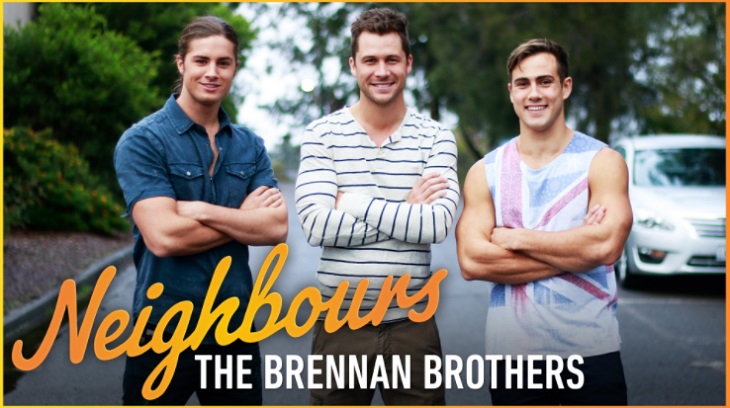 Just as he did in life, Russell Brennan manages to divide his family in death. The abusive dad left a legacy of hurt among his kids, and he continues to spread the love long after he’s gone.

In the coming days expect the Brennan kids to be floored by the contents of their dad’s will. Erinsborough residents Mark (Scott McGregor), Aaron (Matt Wilson), and Tyler (Travis Burns) are still grieving their loss when Toadie (Ryan Moloney) announces that he will be reading the will next week.

Although the brothers knew that Russell was ill, they were not able to travel to see him before he died. Knowing that he passed away without saying a final farewell is something that the brothers have experienced a bit of guilt over. But maybe their guilt will turn to dismay when they hear what each has been left?

At first they take Toadie’s news in stride, until he helpfully informs them to prepare for a blockbuster bequest.

First up, lucky Mark will get Russell’s old fishing rods. Next, Chloe gets his old leather jacket; just what every girl wants!

But the real surprise is what Aaron and Tyler receive: the remaining assets which could be considerable. It seems that Russell had a boat that looks to be worth a pretty penny.

Has Russell sent a message from beyond the grave, slighting Mark and Chloe while rewarding Aaron and Tyler? Sure looks that way!

If Russell wanted to continue to divide his family even after he’s gone, he’s succeeded. When the brothers take off to see what kind of shape the boat is in, expect Mark to be less than thrilled about being left out of the magnanimous gifting.

Now Aaron and Tyler must decide what to do with their inheritance. Do they keep their expensive gift? Or should they sell it and take the cash; and if so do they share with Mark and Chloe?

The Bold and the Beautiful Poll: How Will Sheila Eliminate Quinn and Become Eric’s Wife Again? VOTE!