Home and Away Spoilers: Will Phoebe Leave Summer Bay Without Justin? 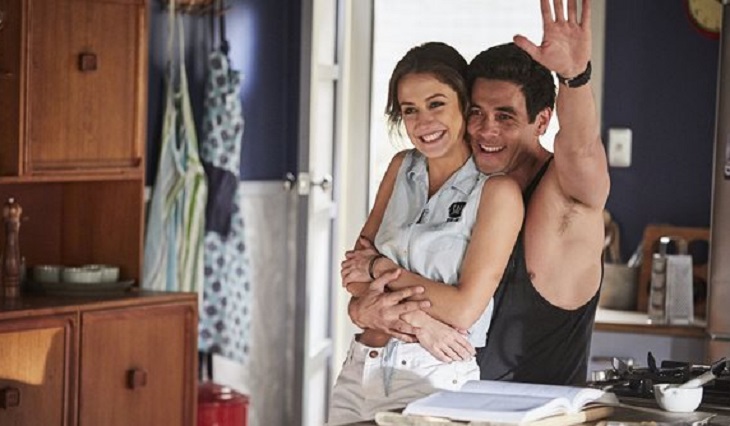 On “Home and Away,” beautiful and talented Phoebe and her loyal fiancé Justin were about to ride off into the sunset, but will a sudden visitor kill their chance at happiness? What happens when a knock at the door shocks the couple into reevaluating their plans to relocate to America?

It was a lifetime ago when Justin’s existence was turned inside out after being forced to go into the witness protection program. At the time Justin had no choice in the matter and had to give up being a presence in the life of his young daughter, Ava. Although his identity was eventually exposed, his wife insisted that he have no contact with their daughter.

Related: Home and Away Spoilers: Ash Reunites With ‘Dead’ Brother

Fast forward to the present day, which finds Justin and his fiancé Phoebe preparing to jet off to the U.S., in order for Phoebe to kick start her music career.

The happy couple are looking forward to a fresh start in the States. Phoebe has been offered a music contract, and all she needs to do is sign it before she and Justin can relocate.But before the blissful pair can pack their bags, a knock at the door jeopardizes all of their exciting plans. Justin can’t believe his eyes when he finds adorable daughter Ava standing on the doorstep, asking where he is!

Father and daughter begin to bond, even as Ava confronts her father over his absence. Clearly the duo have a lot of lost time to make up for, a startling realization that slowly dawns on poor Phoebe. What does Ava’s arrival mean for her and Justin’s future?

Related: Neighbours Spoilers: Who Will Die In Horrific Crash?

Will Ava’s sudden appearance impact the decision that Justin and Phoebe have made to share a new life together? Can Justin give up a second chance to be with Ava? A heartbreaking decision must be made: who will Justin choose?

Will Phoebe really leave Summer Bay behind as a single woman for a brand new life in America?

The Young and the Restless Spoilers Friday April 28: Victoria Begs Billy For Another Chance – Jack Grills Nikki – Cane and Juliet in Trouble