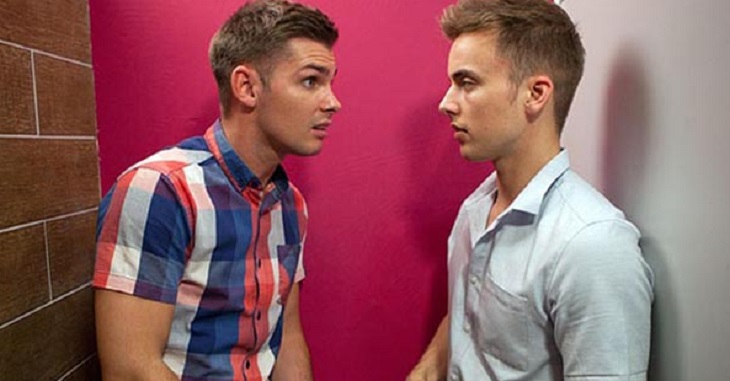 Hollyoaks spoilers tease that the good news for Ste Hay (Kieron Richardson) and Harry Thompson (Daniel Seymour)  is that a wedding is in the works. The bad news? One of them needs to get sprung from prison before it can happen!

Harry may be jumping the gun with his plans for holy matrimony. Although the eager guy books a date to make it official, there’s just one problem: his partner is otherwise occupied in a jail cell. Maybe the prison chapel is available that day?

Even if poor Ste is released in time for his own nuptials, there’s no guaranteeing that he’ll be in a mood to celebrate. He’s been put away for the murder of Amy Barnes (Ashley Slanina-Davies) and the stress of confinement and all the little inconveniences that go along with it are mounting.

On top of it all, distraught Ste has stopped taking his lifesaving HIV medication. This is not good. In response to the horrible situation they find themselves in, Harry starts drinking to self-medicate. In his somewhat altered state of mind, he gets an idea to perk up Ste: tell him that they’re getting married.

During a visit to Ste, Harry starts out slowly, telling him to look on the bright side of life. He then informs Ste that one of the things he can look forward to is the two of them getting married. We can’t reveal what Ste’s response is, but we can tell you that it may not be what you’d expect! Will Harry be able to convince Ste of his good intentions? Or will Ste throw a wrench into his plans?

Meanwhile, Tegan Lomax (Jessica Ellis) will learn some new information about the circumstances involving Amy’s murder. Although Ste has been booked for the crime, there is fresh evidence that may exonerate him. Apparently someone else was with Amy before she died, and they were seen arguing. Will Ste catch a break and gain his freedom, or is his self-destructive path about to escalate?