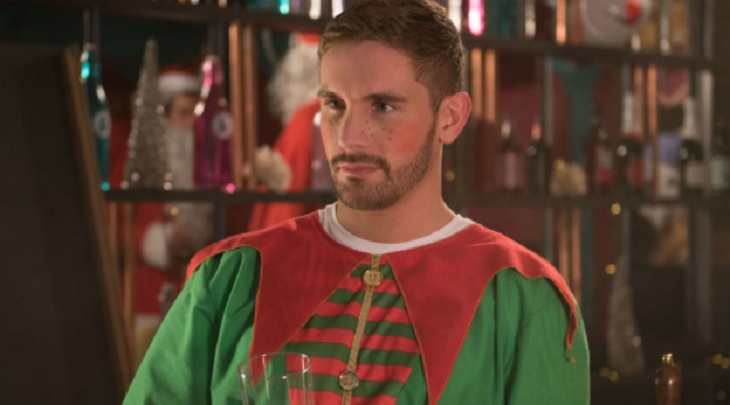 Hollyoaks spoilers tease that Brody Hudson (Adam Woodward) will be caught in the middle of a huge secret when he discovers Maggie Kinsella’s (Michelle Holmes) bombshell news.

Just in time for the holidays, Brody will discover the sad news that Maggie has cancer. Complicating matters, Maggie doesn’t want him to tell Damon Kinsella (Jacob Roberts) a word about her condition.

Can Brody keep this whopper from Maggie’s son and his best friend? His loyalty will be sorely tested as Maggie remains adamant that he keep her secret. What should Brody do? Respect the wishes of a sick woman, or tell the truth and let the chips fall where they may?

Prior to finding out, Damon and Brody host a festive Christmas party at The Dog. These two are thick as thieves, will Damon ever be able to forgive his friend if he keeps him in the dark regarding his mom’s health?

After Brody discovers the awful truth about Maggie, she will ramp up his angst even more. Maggie desperately wants to be around her the people she loves, and she extends an invitation to Brody and Damon.

Maggie wants to know, will they go on a cruise with her? That’s an offer that would be hard to refuse, but somehow both young men find it difficult to say yes.

For his part, Damon is having a problem with the way that Maggie is treating her other son, Scott Drinkwell (Ross Adams). Maggie has chosen to shun the long-lost brother and Damon tells her that he won’t go on the cruise with her if she excludes Scott.

On the other hand, Brody is conflicted because he knows something Damon doesn’t: would he be able to keep the huge secret?

Look for Brody to do some deep soul-searching in the days ahead on Hollyoaks as he confronts his conscience. Will he be the one to out Maggie’s secret?

And if so, how Damon react when he finds out that Brody and his mom both deceived him?

The Young and the Restless (YR) Spoilers: Sharon Right To Be Concerned – Scott Is Conflicted