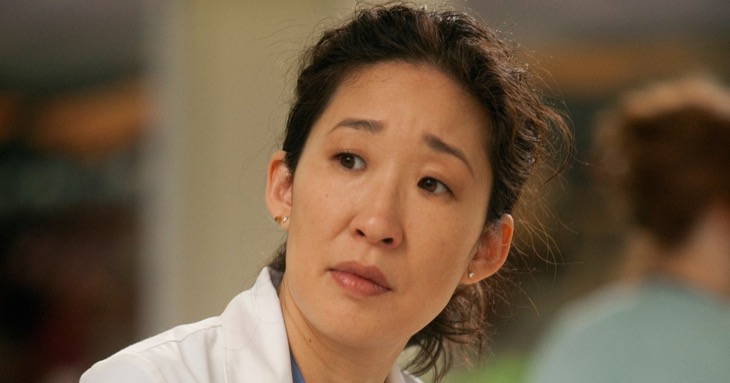 Grey’s Anatomy Season 14 spoilers indicate there’s a good possibility that Sandra Oh might be making a surprise return to the hit medical drama. As a matter of fact, Grey’s producers hinted that Cristina Yang might make an actual appearance at Grey Sloan for the show’s nostalgic 300th episode.

Of course, this isn’t the first time that Cristina would me making a surprise return, as fans remember when she temporarily relocated to Minnesota just to come back to Seattle shortly thereafter. The last time we say her she was struggling to come to terms with her feelings for Owen right before she accepted a job to run a new hospital in Switzerland.

According to TV Line, Grey Anatomy’s executive producer Krista Vernoff hints that everyone would love to see Sandra Oh back. After all, she was one of the original cast members from Season 1 and to see Sandra return for the show’s 300th episode would be a huge treat for die-hard fans who have been watching Grey’s Anatomy since day one. Vernoff told the site, “I would give anything for a visit from Sandra Oh,” before adding with a laugh, “Do you know her? Can you call her and talk her into it? That would be a fine occasion for a visit.”

And while Sandra will be quite busy with her new BBC America drama, Killing Eve, anything can still happen. Fans will just have to tune in to see what will happen next for the staff at Grey Sloan.

So far Sandra Oh herself has not made any comments about a possible return. Tell us, would you be surprised to see Sandra Oh back on Grey’s Anatomy? Let us know by dropping us a line with your thoughts in our comments section below.

Grey’s Anatomy airs Thursdays at 9pm EST on the ABC network. In the meantime, don’t forget to check back with Soap Opera Spy for all the latest news, updates and spoilers on Grey’s Anatomy and all of your favorite primetime shows right here.

Coronation Street Weekly Spoilers October 9 to 14, You NEED To Know!

The Young and the Restless (YR) Spoilers: Nick Knows Victor Is A Thief – Newman War Rages