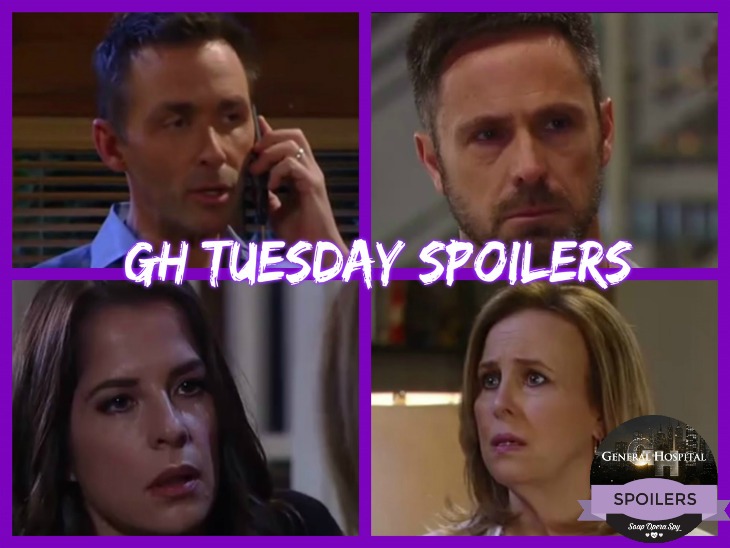 General Hospital (GH) spoilers for Tuesday, June 6th promise a day of worry, anticipation and face off’s. For starters, we have Jason (Billy Miller) and Sonny (Maurice Bernard), who will be catching up over a bottle of scotch and discussing the recent events that unfolded at the Nurse’s ball and the mystery surrounding the Chimera Project. Sonny will be offering his help to Jason in order to track down the person who sent that magic box to Jason’s son, Jake Webber (Hudson West).

General Hospital spoilers tease that something seems to be troubling Sam. GH Spoilers indicate that Sam (Kelly Monaco) will be having some deadly premonitions of a former enemy. It seems Sam’s mother, Alexis (Nancy Lee Grahn) will grow concerned when she notices the toll it is having over her. Will Sam open up to her mother regarding her fears?

Over at General Hospital, the all new GH spoiler video shows Lucas (Ryan Carnes) has a run-in with his father, Julian Jerome (William DeVry) where he asks his father, “you’ve lived this long without my approval, why is it needed now?”. Will Julian be able to connect with Lucas or is it too late?

Check Out: Death In Daytime – A Soap Opera Mystery

Tuesday’s GH spoiler video also shows Anna Devane (Finola Hughes), who seems to be catching up to Valentin Cassadine(James Patrick Stuart), he is still on the run and evading arrest.

Nina (Michelle Stafford) has already tipped off Anna as to where he can be found- Niagra Falls- so it’s only a matter of time until Anna finds him and apparently she will and will attempt to talk him down. Will Valentin listen to Anna and agree to return to Port Charles peacefully? All this and more will be coming up on tomorrow’s episode of General Hospital- Stay tuned!

The Young and the Restless Spoilers: Elizabeth Hendrickson’s Retrospective Reflects Double Write-Out – Kevin and Chloe Will Be Missed

WATCH: The Bold and The Beautiful Preview Video Tuesday, June 6