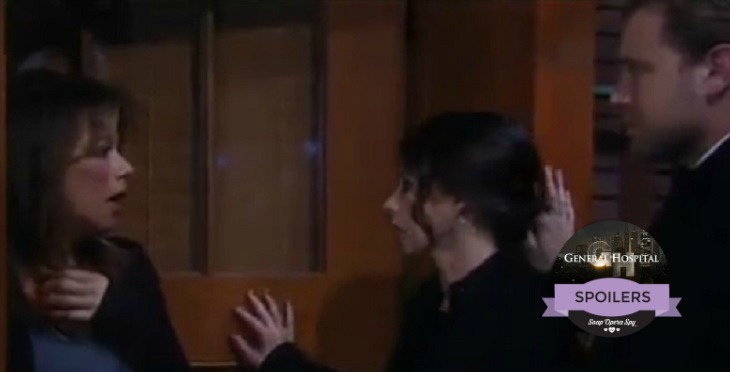 General Hospital (GH) spoilers for Tuesday, January 3, 2017 bring a lot of conflict and heartache to Port Charles.  The new year is supposed to bring promises of better things but so far most residents are fighting with their loved ones.

Samantha (Kelly Monaco) and her husband, Jason Morgan (Billy Miller) go to visit her mother Alexis Davis’ (Nancy Lee Grahn) at her house to confront her on some things they have discovered.

We know that Alexis has been drinking herself into a stupor the past, but what are they so angry about, is it that they learned Rudge (David Lee), the pawnbroker has paid her a visit, or did they find out that she has allowed Julian Jerome (William DeVry) to live with her?

General Hospital’s Valentin Cassadine (James Patrick Stuart) has been painted as the most dangerous and ruthless Cassadine that has ever lived.

But, so far he has shown that he is very compassionate and loving with both his daughter, Charlotte (Scarlett Fernandez) and his new wife, Nina Reeves (Michelle Stafford).

Nina and Valentin were married on New Year’s Eve and sources show they are basking in bliss agreeing they did the best thing for Charlotte.

Lulu Spencer Falconeri (Emme Rylan) has been a bit out of control when it comes to Charlotte.  Her need to have custody of her newfound little girl has been clouding her judgment and she is becoming increasingly irrational.  Dante Falconeri (Dominic Zamprogna) agrees that they should gain custody of Charlotte, but warns Lulu that her fighting with Nina is going to become an issue in the custody battle; Lulu doesn’t agree and it looks like this subject is going to cause much grief between them.

Related: Franco Close To Solving Tom’s Murder, Exposing Killer May Cost Franco His Own Life Though!

GH’s Franco Baldwin (Roger Howarth) has done a lot to prove himself over the years, and when he had his tumor removed it was believed he would be a changed man.  He recently turned to the dark side and abducted Tom Baker (Don Harvey), holding him captive in a cage with a shock collar around his neck.  After Tom turned the tables on Franco, Tom turned up dead and Franco became the prime suspect.

Initially it looked like Elizabeth Webber (Rebecca Herbst) believed him; but now Franco is questioning her trust.  Franco demands to know whether Liz believes him when he tells her he didn’t kill Tom.  Will Liz continue to believe him or does her faith waiver?

Port Charles mobster Sonny Corinthos (Maurice Benard) has been struggling to keep his marriage to Carly (Laura Wright) alive while they mourn the loss of their son Morgan (Bryan Craig).  Sonny, however, has a secret he is keeping from Carly and the guilt is eating him alive.

GH spoilers show that after the couple ring in the new year together, their reunion is short-lived when Carly informs Sonny that his lifestyle and business is not an option for her.  She insists that he will always keep his business and she cannot risk losing any more people she loves to it.

Be sure to tune into ABC’s General Hospital (GH) on Tuesday, January 3, 2017 to catch up on all these stories and more.  Check Soap Opera Spy often for updates, news, rumors and spoilers!