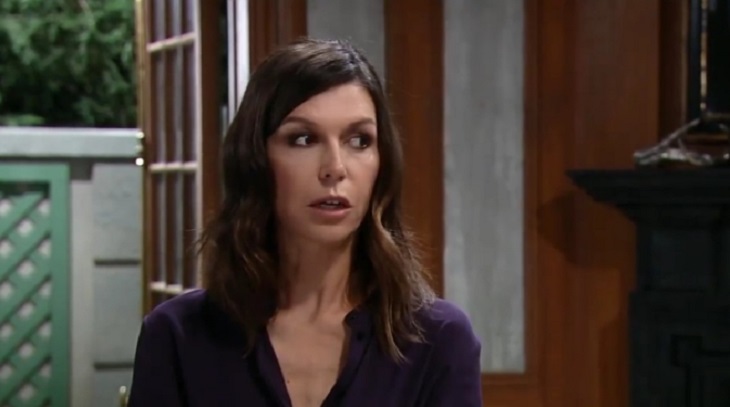 General Hospital (GH) spoilers reveal a lot of happening with Anna Devane (Finola Hughes) these days.  Hughes recently told SID some juicy tidbits about her storylines and the possible spoilers that are ahead.  Longtime fans know that Anna Devane has been a super spy for government agency WSB and the last time she was romantically involved with anyone was with her beloved Duke Lavery (Ian Buchanan) until his death in May 2015.

To begin with, no one thought Anna would move on with her love life, as there was no one living in Port Charles who could come near the epic love she shared with Duke but things started to change when she shared a dance and kiss with Dr. Andre Maddox (Anthony Montgomery); although there hasn’t been much screen time between the two lately, Hughes teases that this might not be the end for them.

Related: General Hospital POLL: Will Ava Redeem Herself and Risk Her Life To Save Patient 6? Vote

General Hospital spoilers tease that currently, Anna is on a rather obsessive mission with Dr. Hamilton Finn (Michael Easton) to uncover Cassandra Pierce’s (Jessica Tuck) connection to the elusive Valentin Cassadine (James Patrick Stuart).  Anna went out of her way to blackmail Finn into helping her, and as they are deeply drawn into the mystery, there is no saying whether she could become involved with him.

Finn could easily turn to Anna, who would be understanding that he needs to mourn the loss of his unborn baby with Hayden Barnes (Rebecca Budig); it would be the perfect opening for them to find comfort and companionship in each others arms, no?  Finola Hughes admits she is very excited to see where this storyline goes and promises that it will be filled with excitement and awe.  She of course teases that maybe who we are seeing isn’t really Anna, but actually Alex – how do you feel about her evil twin emerging once again?

Related: General Hospital Spoilers: Man Landers Disastrous Reveal – Nathan in Trouble, How Much Will He Lose?

General Hospital spoilers reveal Anna could be headed for trouble, as we might remember that Valentin recently reminded Anna that she isn’t a saint either and also has her own sordid past.  It almost felt like he was threatening her or being like Cassadine Matriarch, Helena (Constance Towers) implying that her secret past could be more of a curse than she realizes.

Be sure to tune into ABC’s General Hospital (GH) to catch up on everything happening in Port Charles and how everything will unfold with Anna Devane.  Check Soap Opera Spy often for updates, news, rumors and spoilers!