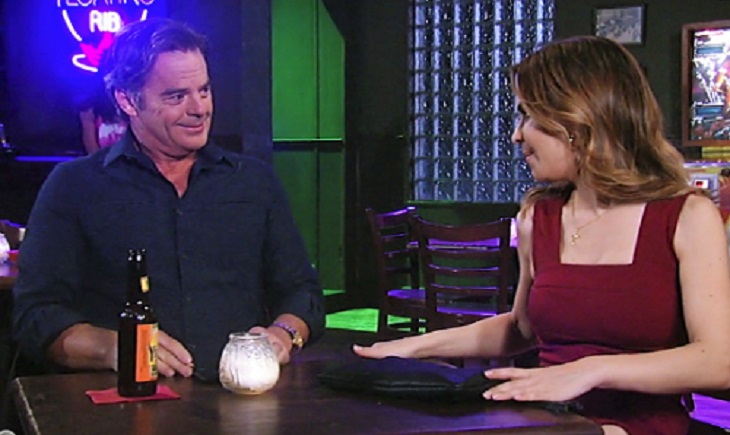 Thursday’s March 29 episode of General Hospital begins with Tracy (Jane Elliott) still trying to convince Laura (Genie Francis) to go on this adventure to Turkey. Tracy suggests they could try a hookah or two. Laura can’t go because she has a life.

Tracy is being swindled and frustrated at Laura’s refusal to help her. Tracy decides she’ll go alone. Laura is worried Tracy won’t fit in the culture. She doesn’t know the language. Laura finally agrees to go with Tracy. Tracy says her Father would be grateful and hugs Laura.

Jordan (Vinessa Antoine) and Curtis (Donnell Turner) are finishing their dinner at the Metro Court. They start to kiss when Curtis gets a call from Jason (Billy Miller).

Jason needs his help with Jake and it may require going out of town. Curtis agrees and will meet Jason in the morning.

Curtis questions where their relationship stands at this point. He’s hoping they can kiss in public. They kiss and Jordan receives a text regarding Float Rib alarm being triggered. Curtis suggests she send someone else because it’s probably nothing.

Jason finishes the call and tells Sam (Kelly Morgan) he is worried about Jake. Jake could be in some real trouble. Jason updates Sam on Jake’s drawing and mentioning her being cursed by Helena. Sam is wondering how Jake could possibly know about the curse. Jason isn’t certain but doesn’t want Franco putting anything in Jake’s head. Jason and Sam are baffled at Liz’s decision to keep Franco in her life. Jason tells Sam he has a game plan and Curtis will be there in the morning to assist but he has something do tonight.

Liz (Rebecca Herbst) leaves Franco (Roger Howarth) a voicemail begging him to call her. Liz explains the situation of Jake, Jason, and Franco. Liz blames Jason. Kiki walks to Liz and explains she’s volunteering at the pysch ward while getting certified to be a Nurses Aid. Kiki mentions Franco. Liz updates her on Jake/Jason and Franco. Kiki tells Liz not to let Jason come between them. Liz hopes Jason will calm down and thinks it may be too early for Franco to move in with her and the boys. Kiki encourages Liz not to let Jason bully her and goes back to work.

Related: Watch Maurice Benard In The Ghost and the Whale

Franco is at Nina’s (Michelle Stafford) home wishing her a happy marriage as he hands her a wedding present. Franco needs to talk to someone and Nina agrees to be that person. Franco starts talking about Liz and Jake. Nina calls him self centered and he apologizes.

Nina doesn’t like the way he ended things with her but she’ll never regret it. Franco fears Jason will take Jake away from Liz if their relationship continues. He doesn’t want to live without Liz or Jake. Nina is married and now has a family. Franco is nothing to Jake. Franco tells her she’s a genius and he’ll just marry Liz. Nina puzzled at his assessment but agrees. Franco leaves.

The two gun toting masked men at the Floating Rib demand everyone’s cell phones. Ned (Wally Kurth) wasn’t able to finish the call to 911. Ava shouts “don’t hurt me, I have children” as one of the men grabs her. The other man demands Olivia’s (Lisa LiCicero) money and jewelry.

Olivia says he’ll get laughed at the pawn shop for hers. Lucy is handed a black duffle bag to put all the items including Morgan’s medicine bottle. He mentions Ava’s sculpture is ugly and doesn’t want it. Olivia won’t give up Lila’s ring. The gun is placed in her face as Ned is begging Olivia to give the ring up. Gunman starts to count to three when Ned jumps up and tries to tackle him. A gun shot is heard.

Jordan’s shouts “drop your weapons”! Curtis is impressed at Jordan hitting gunman in the arm and victims not getting hurt.

Jordan stops Ava from retrieving her items from the duffle bag. Jordan picks up the bag as evidence and leaves to do loads of paperwork. She and Curtis agree to continue their date another time.

Lucy picks up the sculpture as Ava is upset the pills went to the police station. Lucy says it’s not her problem and leaves.

Olivia hits Ned asking him what was he doing trying to stop the gunman. Ned realizes she’s afraid of a marriage document but not a gun. Olivia starts laughing and realizes she loves Ned more than anything. Olivia proposes to Ned and he accepts. Olivia jumps in his arms shouting “I’m marrying a rock star”!

Liz is standing near the nurses’ station when Franco approaches. He has something to ask her. He bends down on one knee and asks her to marry him.

WATCH: The Young and The Restless Preview Video Friday, March 31