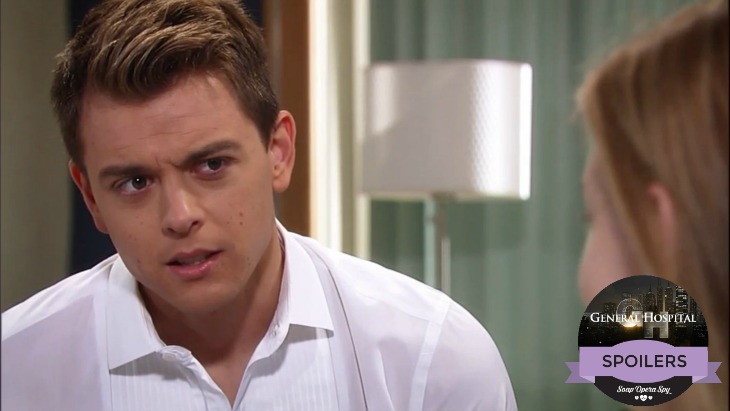 Thursday’s June 1 episode of General Hospital begins with Hayden (Rebecca Budig) experiencing morning sickness due to her pregnancy. Finn (Michael Easton) tells Hayden his town house closing is soon. There will be room for all three of them. Hayden is cautious because they haven’t discussed their future. Finn tells Hayden he does want a family. They discuss their own insecurities about being good parents but agree they’re moving in together.

Nelle (Chloe Lanier) wakes up in her hospital bed and sees Michael (Chad Duell) asleep in the chair. Michael wakes up and starts to leave to get the doctor. Nelle stops him and says he went above and beyond and he’s off the hook and doesn’t have to do anything else for her. Michael says he’ll leave if she doesn’t want him there.

Nelle says its fine he’s taking care of her like he does everyone else. He wants to help her. Nelle says it would have been worse had he not found her. Michael tells Nelle: “If liking you is a hook then I don’t want to be off the hook”.

Bobbie (Jacklyn Zeman) informs Kiki (Hayley Erin) they’re trying to stabilize Ava and prevent hypothermia. Bobbie asks about next of kin. Grandma doesn’t get along well with Ava and Julian’s in jail. Bobbie tells Kiki many decisions will need to be made regarding Ava’s care. Bobbie leaves to find the social worker.

Bobbie enters Nelle’s room and asks to speak to Michael alone. In the hallway she tells him to go see his parents and it’s about Morgan. Michael leaves. Bobbie tells Nelle her kidney functions are bouncing back and asks if she’s still leaving town. Bobbie tells Nelle her presence here will only complicate Michael’s life. “Michael may say he cares for you but it transfers to just pity”.

Diane (Carolyn Hennesy) is at the PCPD and calls Alexis (Nancy Lee Grahn) to say she’ll be stopping by soon. Diane finishes the call and hands a paper to Jordan (Vinessa Antoine) to cease from harassing her client. Ava is mentioned about bringing her to justice. Julian (William deVry) over hears. Diane learns Julian made bail and is being released. Diane suggests Jordan take Julian’s passport and leaves. Jordan tells Julian that Ava is in critical condition. 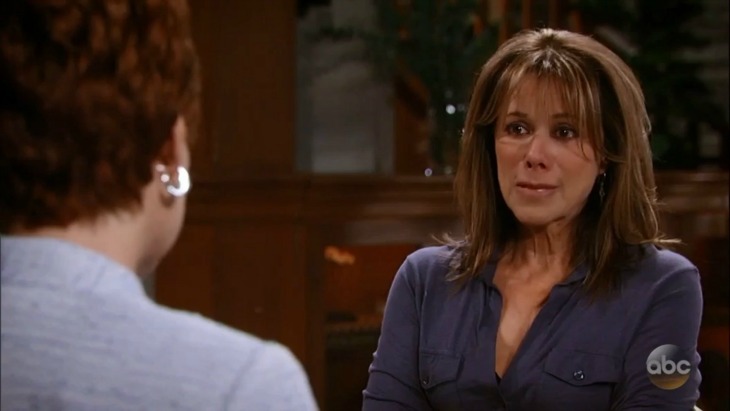 Diane arrives to Alexis’s house and informs her law license has been reinstated. Alexis cries as she thanks Diane and promises to not to screw up. Alexis wonders how Julian got the bail but she’ll find out later. Diane tells Alexis about Ava. Alexis is concerned for Julian. Diane tells Alexis that Julian is the reason she lost her law license and the reason she almost didn’t get it back. Diane threatens to lock Alexis in a closet if she goes around Julian.

Ava’s doctor asks Kiki if Ava has a living will. Kiki doesn’t know but Julian arrives and he knows. Julian knocks on the window of Ava’s room. He tells the nurse he is Ava’s brother. They can go one at time but must wear a mask while in Ava’s room. Julian tells Kiki she can go first but she hesitates. Julian reassures Kiki and goes in to see Ava. Kiki tells Dillon (Robert Palmer Watkins) she can’t see Ava right now. Dillon tells Kiki she can’t turn her back on Ava until she knows for sure why she’s doing it. Kiki leaves. Julian sits at Ava’s beside crying and saying he’s there for her. Julian leaves Ava’s room and is standing in the hallway wiping his tears as Alexis walks up.

Dante (Dominic Zamprogna) tells Sonny’s (Maurice Benard) the fire marshal confirmed Ava (Maura West) set the fire. Sonny wants Ava arrested but Dante says to be realistic no one is in a hurry to arrest her. Sonny tells Dante not to judge me because he doesn’t care about Ava’s health. Ava’s actions resulted in Morgan’s death. Dante’s concerned what he’ll tell Avery when she’s old enough to understand. Sonny will tell her Morgan died because of Ava’s actions, she doesn’t have to be like her Mother and he loves her. Sonny hopes all of it will be enough. Dante leaves.

Dante arrives to PCPD and gives Jordan the pills in Morgan’s medicine bottle. Dante mentions Ava being arrested. Jordan says it’s not top priority and Ava’s burns are her punishment.

Michael arrives to see Sonny. Sonny tells him about Ava being responsible for Morgan’s death. Michael tells Sonny to think of the price they’ll all pay if he intervenes in Ava’s possible death. Michael leaves.

Kiki arrives to Sonny’s house. He asks why she wanted to see him. Kiki says she needs the truth about Ava.

The Young and the Restless Spoilers Monday June 5: Chelsea Reacts to News of Chloe’s Funeral – Juliet Ready for Trouble – Hilary Gets Mischievous