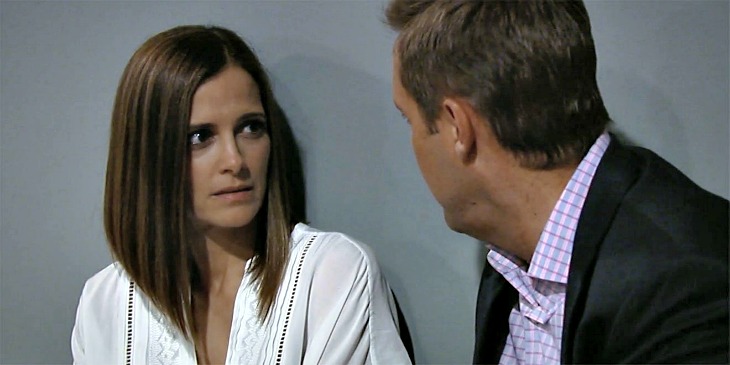 Wednesday’s August 2 episode of General Hospital begins with Michael (Chad Duell) on the phone making certain the search for Sonny (Maurice Benard) is still going and not to include the PCPD. Nelle (Chloe Lanier) took a personal day from work to help Michael search. Michael thanks Nelle for letting him spend the night. Nelle mentions having a phobia about being so happy

Joss (Eden McCoy) opens the door to get the newspaper as Oscar (Garren Stitt) starts to sit a gift box down. Joss doesn’t want anything bad to happen to Sonny. Oscar starts to leave and Joss mentions the gift.

Oscar made her a necklace out of the shell casing. He places it around her neck and leaves. Joss arrives to Nelle’s to show her the necklace. Nelle shows it to Michael. Michael explains it’s a shell casing.

Jason (Billy Miller) is on the phone with Danny explaining Mommy is still sleeping. He finishes the call and Sam (Kelly Monaco) wakes up. The nurse leaves to get the doctors. Sam only remembers leaving their place when Sonny was there with Jason.

Jason follows the doctors to the hallway to ask about Sam’s memory loss. Griffin says her memory will return eventually. Later Jason is helping Sam take a walk in the hallway. Garvey (Rick Ravanello) is awake on the cart and looks at Sam as he passes them. Jason asks Sam if something is wrong. 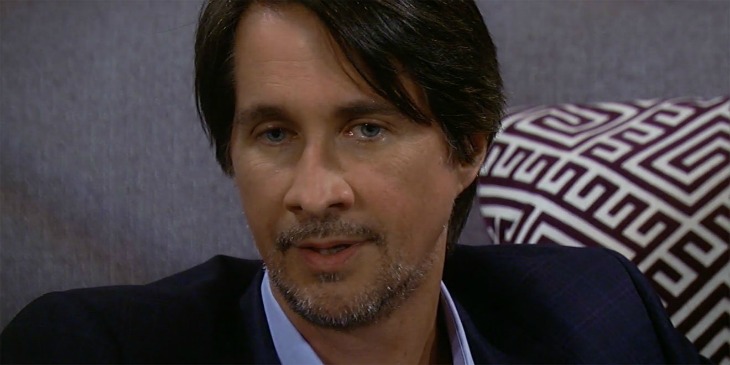 Finn (Michael Easton) quickly finishes his phone call to Tracy when Hayden (Rebecca Budig) walks up. Nurse tells Hayden there is a patient that wants to see her regarding an invoice. Hayden walks in the room and sees Jared. Jared threatens Hayden he’ll tell Finn if she doesn’t make restitution. Jared knows a private place they can meet.

Griffin (Matt Cohen) and Deanna quickly leave as Hayden approaches Finn at the nurses station. Finn shows Hayden the diamond engagement ring. Hayden puts the ring on and says she’s going to get it sized right now. They hug and Hayden sees Jared at the elevator pointing to his watch.

Hayden meets Jared at her new house. She can try to find him a job at ELQ. He wants money not a job. Hayden doesn’t have any assets but Jared suggests the engagement ring. Hayden refuses so he suggests stealing money from the hospital. Jared gives her one week to come up with the money or he tells Finn about her drunken driving accident that put a little girl in a wheelchair for the rest of her life.

Finn is at his apartment holding a letter from his deceased wife as he talks about marrying Hayden. Finn smells the paper saying it still smells like Reiko. Finn talks about his future with Hayden and having a baby together. Finn wishes he could keep her around but he can’t. Finn sets the paper on fire.

EastEnders Spoilers: Cora and Tanya To Return To The Square