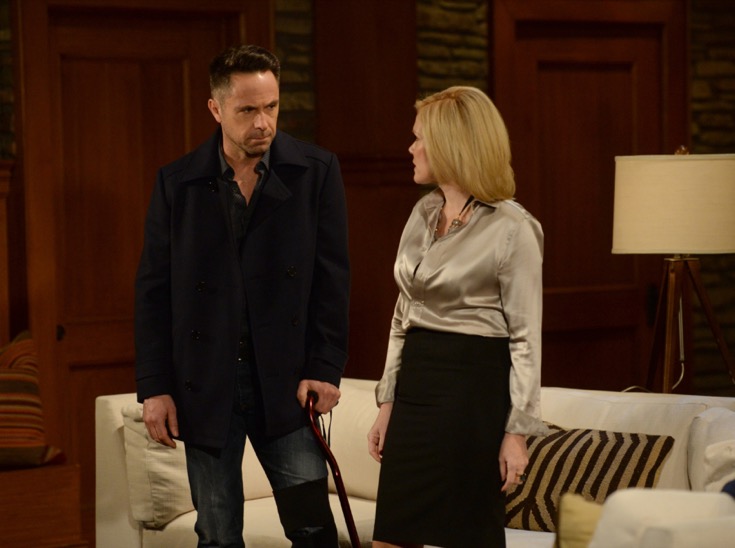 This week we saw Julian Jerome return from the dead on, “General Hospital,” but fans shouldn’t assume that means that his portrayer, William deVry, will remain on the hit ABC soap. With his current contract far being a done deal, deVry can’t say with certainty how long he’ll continue to play Port Charles’ mob boss extraordinaire.

In a candid interview with ABC Soaps in Depth, the talented actor dished the details surrounding his maybe-return.

When asked if Julian’s miraculous, hoody-clad, return from the dead down at the docks meant that he’s signed a contract, deVry remained vague saying, “That’s not necessarily so … until it’s done, it’s not done.

The actor is taking a philosophical approach to the situation, saying, “When I need to cross that bridge … it will all get sorted out. If we want to work with each other, we will.”

On a lighter note, because he was off-screen during Julian’s “death,” followed by a two week taping hiatus, deVry enjoyed an almost month long, much deserved vacation. He enjoyed some downtime at home and then jetted of for some sun and fun on Florida’s sandy beaches.

Being cuffed to a table is not the way Julian imagined his Friday would go. #GH starts NOW on ABC! Check your local listings for more. pic.twitter.com/sdSioOKruI

Accompanying the hardworking actor were his mother, and girlfriend Rebecca Staab (Elizabeth, Port Charles). Staab has a busy summer ahead, with two upcoming projects in the works. She’s set to star in ABC’s, “Somehere Between,” as well as the indie film, “Snapshots.”

“Snapshots,” begins production in late June or early July, and also stars deVry. The film marks the first time that the two will act together. Although they both appeared on, “Port Charles,” the couple never had the opportunity to share scenes.

We hope that deVry resolves the issues surrounding his contract, since his presence on the show is something that cannot be replaced. His nuanced performance as a man torn between familial obligation and the love of his life enthralled audiences over the past year.

Julian and Alexis still have a spark between them, as witnessed by their “goodbye” encounter prior to his arrest. If the fans could vote, Julexis would certainly be a thing for many more years to come.

Days of Our Lives Spoilers Week of April 24 to 28: Xander Brings Dangerous Drama to Canada – Nicole and Holly Kidnapped, Brady Shot in a Struggle