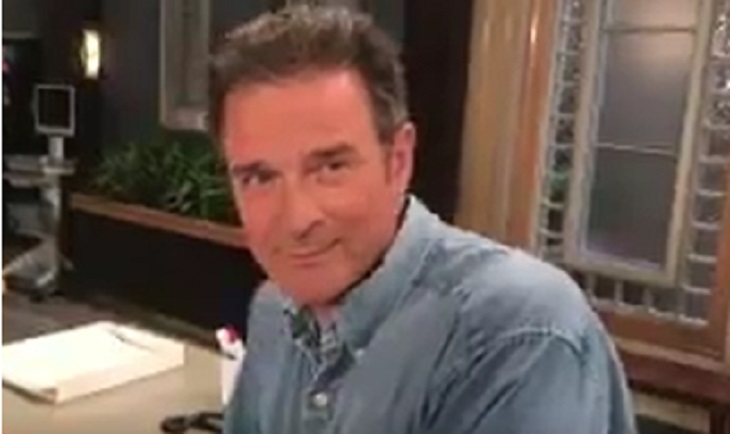 General Hospital (GH) news and comings and goings indicate that another familiar face will soon be arriving in Port Charles and it will be a pleasant surprise when he finally pops up on our daytime screens.

Executive Producer, Frank Valentini posted a video on twitter on June 6th, which clearly shows him walking through the halls of General Hospital and teasing something exciting and promising for General Hospital fans.

Frank Valentini was seen in the video stating “Just when you thought it was safe to go back to the hospital” and then he points off to the side and actor Jimmy DePaiva is seen turning toward the camera in a very charming manner and removing his sunglasses.

Of course, no further information was given to fans but the title of his twitter video does give viewers a few hints. His role is being said to be one of “top secret” so as of right now, it is being kept under tight wraps. Could Depaiva be portraying the role of a WSB agent and be in Port Charles to help out with the Chimera storyline or perhaps he will be a bad guy roaming the halls of GH as Frank jokingly stated?

Valentini does give the impression that DePaiva’s character might possibly be a bad guy but to what degree? Many viewers who once tuned into the now-canceled soap opera One Life to Live should recognize him immediately as the womanizing, charmer, Max Holden. He began his role on OLTL from 1987 to 1990 and from 1991 to 2003 and later he made a brief return to the series in August of 2007 for the 9,999th and 10,000th episodes.

Related: Will Kimberly McCullough Return to GH After The Baby Is Born?

After DePaiva left the role of Max on OLTL, he then took up directing installments for the soap opera and also did some directing work for As the World Turns. Whatever DePaiva’s role will be on General Hospital- we are thrilled that he has joined the cast and look forward to whatever he brings to the city of Port Charles!

No official first airdate has yet been announced but should that information become available, we here at Soap Opera Spy will bring that to you as soon as we can! Stay tuned!

Is that Jimmy DePaiva?!? Watch #GH daily and you might figure out what his TOP SECRET role will be. pic.twitter.com/Ra8F7tFWBy

WATCH: The Young and The Restless Preview Video Wednesday June 7

The Young and The Restless Spoilers: Dina and Abby Bond Despite Ashley’s Warnings